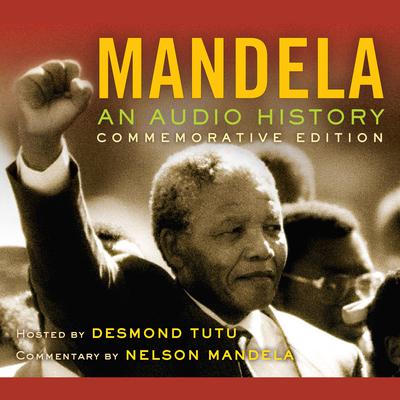 Winner of the 2015 Audie Award for Audiobook of the Year

Winner of the 2015 Audie Award for Best Original Work Narration

Recognized as one of the most comprehensive oral histories of apartheid ever broadcast (NPR, BBC, CBC, SABC), Mandela: An Audio History tells the story of the struggle against apartheid through rare sound recordings. The series weaves together more than 50 first-person interviews with an unprecedented collection of archival sound: a rare recording of the 1964 trial that resulted in Mandela’s life sentence; a visit between Mandela and his family secretly taped by a prison guard; marching songs of guerilla soldiers; government propaganda films; and pirate radio broadcasts from the African National Congress (ANC).

Once thought lost forever, Radio Diaries producer Joe Richman unearthed a treasure trove of these historic recordings in the basement archive of the South African Broadcasting Corporation. Ultimately, over 50 hours of archival recordings and many more hours of contemporary interviews with the living witnesses to South Africa’s turbulent history have gone into the creation of one of the most moving audio documentaries ever produced.


Includes a commemorative 32-page booklet featuring historic photos and a complete transcript of the audio program.

“This remarkable audio history begins with Nelson Mandela’s voice proclaiming on a crackly recording his five immortal words: ‘I am prepared to die.’ The words were uttered when he gave a four-hour speech testifying at his own trial in 1964. Throughout this compelling history, Desmond Tutu is accompanied by multiple voices and newsreels in support of Mandela’s life story. Music such as Miriam Makeba’s ‘Make Us One’ and ‘Beware, Verwored’ (one of South Africa’s prime ministers) is sprinkled throughout. Sound effects like doors closing at Robben Island or prisoners doing hard labor at the quarry personalize the story. President de Klerk’s announcement of Mandela’s freedom and Mandela’s inauguration as president conclude this look at a unique history. Winner of AudioFile Earphones Award.” —AudioFile
“This work commemorates the twentieth anniversary of Mandela’s election into the presidency and the fiftieth anniversary of his landmark speech during the Rivonia Trial. Interviews, eyewitness accounts, speeches, and music bring this audio documentary to life as listeners hear from Mandela as well as those who fought for and against him. Listeners are taken on a journey from the birth of apartheid in 1944 to 1994, when Mandela was the first black man to be elected president of South Africa. Whether listeners know his story well or are just getting acquainted, this audio is enjoyable to listen to and memorable. It includes a full transcript, which allows users to find a particular section with ease.” —School Library Journal