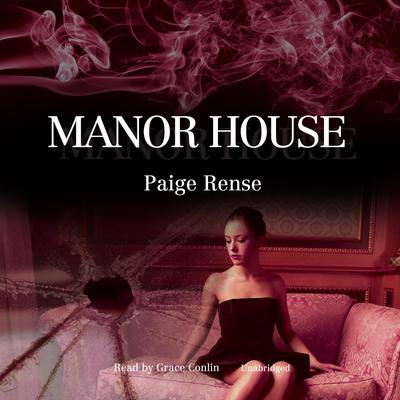 Meet Pierpont Tree and China Carlyle. He’s the devastatingly handsome and urbane scion of an old Santa Barbara family; she’s the ravishingly beautiful, flame-haired film star who retired at the peak of her career. Together, they investigate murders.

Late one night at the California headquarters of the lavish design magazine Manor House, a dark figure puts a bullet through the head of flamboyant editor-in-chief Beau Paxton. The murder leaves Pier and China with quite a crowd of suspects: the twin brothers who own Manor House and hold a multimillion-dollar insurance policy on Beau’s life; the beautiful young managing editor, the real brains behind Beau’s flashy, figurehead position; and a whole world of designers and dealers, players and wanna-bes, high rollers and lowlifes, whose ambitions make Manor House a magazine to die for.

“Manor House kept me riveted until the end. Mrs. Rense writes about a rarefied world in which she moves effortlessly, as one of the keenest observers of her era.” —Dominick Dunne, New York Times bestselling author
“More than a murder mystery, Manor House is also a glimpse into the high-flying world of the super rich…Readers with a mind for murder and an eye for an elegant setting will find Paige Rense’s book made to order.” —Amazon.com Review
“I couldn’t put it down.”  —Mark Hampton
“Conlin keeps the tension wound up tight.” —AudioFile

Paige Rense plotted and executed the rise of Architectural Digest to the top of the highly competitive field of international design publications. For several years she was the only person to hold the position of editor in chief of three magazines simultaneously: Architectural Digest, Bon Appetit, and Geo. A longtime resident of Santa Barbara, Rense now divides her time between Los Angeles, New York, and Vermont, where she lives with her husband, the artist Kenneth Noland.