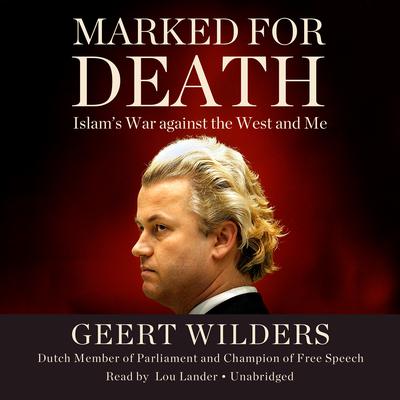 Geert Wilders is a hunted man. He lives in a heavily protected safe house that is bombproof and bulletproof. Why? Because Geert Wilders is marked for death by Islamic extremists. In his new book, Marked for Death, Dutch parliamentarian Geert Wilders tells his never-before-published story about the jihad being waged against him—and the West. Revealing how he has been censored, bullied, threatened, and even banished from the UK for politically opposing Islam and for telling the truth about its violent history and nature, Wilders explains why what has happened to him is happening all across the West—and why Americans need to stop the infiltration of radical Islam now. Marked for Death is an eye-opening account of a man who has sacrificed life as he knew it to tell the truth about radical Islam.

“Americans, Canadians, Australians and others in the relatively ‘free world,’ better take heed and learn from the recent experiences of Mr. Wilders and of other brave singled-out Europeans, because their cultures too are displaying similar trends of preemptive capitulation to islamofascism, and they are going down the same ruinous cultural path that Europe has followed in recent decades to growing bondage.” —The Brussels Journal

Geert Wilders is a politician and leader of the Party for Freedom, the third-largest political party in the Netherlands. He is also known as an outspoken opponent of Islam. His controversial film about his views on Islam, Fitna, received international attention and resulted in his being banned from the UK during part of 2009. That year, the Amsterdam Court of Appeal ordered his prosecution for “incitement to hatred and discrimination.” On June 23, 2011, he was acquitted of the charges.