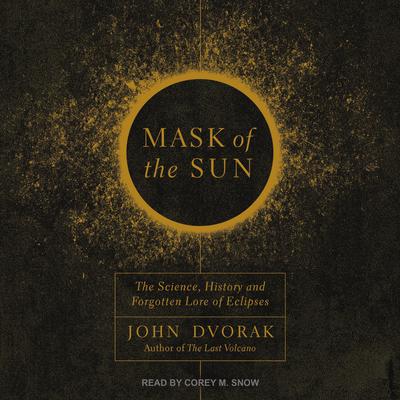 Mask of the Sun: The Science, History and Forgotten Lore of Eclipses

Eclipses have stunned, frightened, emboldened, and mesmerized people for thousands of years. They were recorded on ancient turtle shells discovered in the Wastes of Yin in China, on clay tablets from Mesopotamia and on the Mayan "Dresden Codex." They are mentioned in Homer's Iliad and Odyssey and at least eight times in the Bible. Columbus used them to trick people, while Renaissance painter Taddeo Gaddi was blinded by one. Sorcery was banished within the Catholic Church after astrologers used an eclipse to predict a pope's death.

In Mask of the Sun, acclaimed writer John Dvorak explains the importance of the number 177 and why the ancient Romans thought it was bad to have sexual intercourse during an eclipse (whereas other cultures thought it would be good luck). Even today, pregnant women in Mexico wear safety pins on their underwear during an eclipse. Eclipses are an amazing phenomena—unique to Earth—that have provided the key to much of what we now know and understand about the sun, our moon, gravity, and the workings of the universe.

Both entertaining and authoritative, Mask of the Sun reveals the humanism behind the science of both lunar and solar eclipses. With insightful detail and vividly accessible prose, Dvorak provides explanations as to how and why eclipses occur.

A splendid introduction to all aspects of eclipses; for all readers interested in science. —Library Journal Starred Review

John Dvorak worked on volcanoes and earthquakes for the US Geological Survey, first at Mount Saint Helens then as a series of assignments in California, Hawaii, Italy, Indonesia, Central America, and Alaska. He has written cover stories for Scientific American,Physics Today, and Astronomy magazines, as well as a series of essays about earthquakes and volcanoes for American Scientist. Dvorak has taught at the University of Hawaii and lectured at UCLA, Washington University in St. Louis, the Lunar and Planetary Institute, and the Smithsonian Institution, among others.