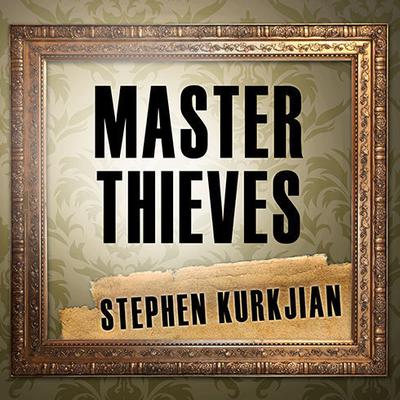 Master Thieves: The Boston Gangsters Who Pulled Off the World's Greatest Art Heist

In a secret meeting in 1981, a master thief named Louis Royce gave career gangster Ralph Rossetti the tip of a lifetime. As a kid, Royce had visited the Isabella Stewart Gardner Museum and made a habit of sneaking in at night to find a good place to sleep. He knew the Museum's security was lax, and he gave this information to a boss of the Boston criminal underworld. It took years before the Museum was hit. But when it finally happened, it quickly became one of the most infamous art heists in history: thirteen works of art valued at up to $500 million—including Rembrandt's "The Storm on the Sea of Galilee." The identity of the thieves was a mystery, and the paintings were never found. What happened in those intervening years? Which Boston crew landed the big score? And why, more than twenty years later, did the FBI issue a press conference stating that they knew who had pulled off the heist and what had happened to the artwork, but provided no identities and scant details? These mysteries are the story of Stephen Kurkjian's revealing book. He will take the listener deep into the Boston mob and paint the most complete and compelling picture of this story ever told.

“Master reporter Steve Kurkjian…leaves the reader feeling like he’s cracked the case. This book has the grit and intelligence of a lifelong gangster and the high tension of a midnight caper.” —Ben Bradlee Jr., New York Times bestselling author of The Kid
[E]ngrossing real-life crime story. —Kirkus
“A gripping, revelatory book. Master Thieves is not only a thrilling heist story but a feat of investigative reporting. The kind of book you can only write if you’ve lived with a story for twenty years.” —Mitchell Zuckoff, New York Times bestselling author of 13 Hours
“A new look at a legendary art heist…[Kurkjian] draws on fresh evidence in Master Thieves to reveal his own chief suspect, tell the full story of the theft, and perhaps hasten the missing works’ return.” —Washington Post
“A cast of characters that would make Martin Scorsese swoon in admiration. There are so many crime-world figures with their fingers in this story that the book is like a GoodFellas/The Departed double feature…Kurkjian constructs a thrilling narrative…A great mystery story well told.” —Boston Globe
“If you want to go looking for the lost Gardner horde (and collect the $5-million reward the gallery offers for its return), there’s no better place to start than the pages of Master Thieves. The museum (and the FBI) could use the help.” —Winnipeg Free Press
“Kurkjian has many threads to unravel…This is a compelling read of an intriguing mystery. With mafia intrigue and a cast of characters, Kurkjian reveals who he believes was really involved and maybe where the paintings might still rest. Recommended for those who like reading about true crime, art history, and heists.” —Library Journal
“Based on interviews with scores of mob bosses, gang members, their wives, girlfriends, family members and lawyers, as well as with policemen and other reporters, Kurkjian believes he knows who did it. He has shared his findings with the FBI, and they come as the climax to this engrossing real-life crime story.” —Kirkus Reviews
“Mike Chamberlain narrates Kurkjian’s keen descriptions and observations with a comfortable feel. Rather than the excitement of an investigation, his narration gives listeners a feeling of the day-to-day aspects of being inside the case. Listeners will start to feel they know everyone—from the security guards who were on duty to the detectives and the Mob figures who’ve joined the investigation. ‘Boston’s last best secret’ doesn’t get answered, but Chamberlain brings listeners in on the workings of the city.” —AudioFile

Stephen Kurkjian is an acclaimed investigative reporter. A veteran of the Boston Globe, he is the paper’s former Washington bureau chief and a founding member of its investigative Spotlight Team. He has won more than twenty-five national and regional awards, including the Pulitzer Prize on three occasions. He is a graduate of Suffolk Law School.