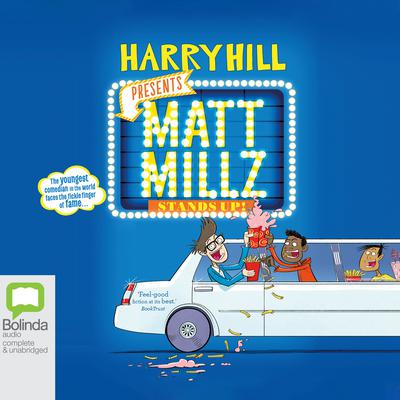 Matt did it! His performance at the T Factor has given him the fame he dreamed of. Kitty is getting more gigs booked in with a whole new stable of comedic acts. Unfortunately, Matt hasn't had time to come up with new jokes so it isn't long before he is greeted with the worst heckle for a comedian: 'heard it before!'. But when Kitty suggests he takes a break to work on his routine, Matt can't stand to go back to his normal life. So he signs up with the stylish Excalibur Agency, brushing his concerns (and Kitty) aside. A life of celebrity awaits! But it doesn't take long for the shine to wear off and when they try and force him on to his first Live At the Apollo, without any preparation and no new jokes, how can Matt save himself from the ultimate humiliation?

Harry Hill is a BAFTA-winning comedian. Born in Woking in 1964, he holds a medical degree. His books include Flight from Deathrow and Tim the Tiny Horse. The TV shows he’s created and starred in include Harry Hill’s TV Burp and Harry Hill’s Alien Fun Capsule, while he’s also the voice of You’ve Been Framed.