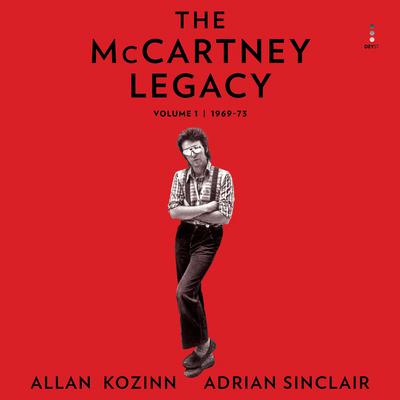 By Allan Kozinn  and Adrian Sinclair
Read by Simon Vance

In this first of a groundbreaking multivolume set, THE MCCARTNEY LEGACY, VOL 1: 1969-73 captures the life of Paul McCartney in the years immediately following the dissolution of the Beatles, a period in which McCartney recreated himself as both a man and a musician. Informed by hundreds of interviews, extensive ground up research, and thousands of never-before-seen documents THE MCCARTNEY LEGACY, VOL 1 is an in depth, revealing exploration of McCartney’s creative and personal lives beyond the Beatles.

When Paul McCartney issued a press release in April 1970 announcing that the world’s most beloved band, the Beatles, had broken up no one could have predicted that McCartney himself would go on to have one of the most successful solo careers in music history. Yet in the years after the Fab Four disbanded, Paul McCartney became a legend in his own right. Now journalist and world-renowned Beatles’ historian Allan Kozinn and award-winning documentarian Adrian Sinclair chronicle in technicolor McCartney’s pivotal years from 1969 to 1973, as he recreated himself in the immediate aftermath of the Beatles breakup – a period when, newly married and with a growing family, he conquered depression and self-doubt, formed a new band, Wings, and recorded five epochal albums culminating in the triumphant smash, Band on the Run.

Part 1 of a multivolume set, THE MCCARTNEY LEGACY, VOL. 1 documents a pivotal moment in the life of a man whose legacy grows increasingly more relevant as his influence on music and pop culture remains as relevant as ever. It is the first truly comprehensive biography, and the most finely detailed exploration of McCartney’s creative life beyond the Beatles, ever undertaken.

Allan Kozinn is an author, teacher, and former reporter on music and culture reporter for the New York Times, where he interviewed Paul McCartney several times. He contributes regularly to the Wall Street Journal, the Washington Post, and other publications. Adrian Sinclair is a researcher who has worked for almost every major broadcaster in the world, including the BBC, ITV, Sky, Channel 4, National Geographic, Discovery, and MTV. He received accolades for his work from the Royal Television Society in England, and his 2010 documentary Stealing Shakespeare was shortlisted for the Emmy Award for Best Documentary.