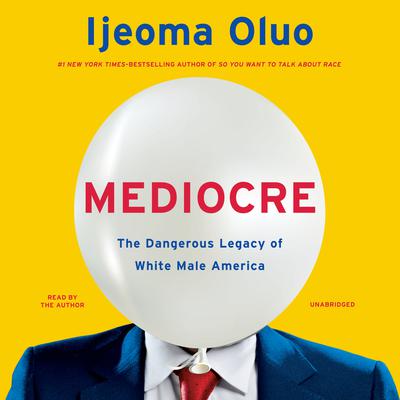 From the author of the New York Times bestseller So You Want to Talk About Race, a subversive history of white male American identity.

What happens to a country that tells generation after generation of white men that they deserve power? What happens when success is defined by status over women and people of color, instead of by actual accomplishments?

Through the last 150 years of American history—from the post-Reconstruction South and the mythic stories of cowboys in the West, to the present-day controversy over NFL protests and the backlash against the rise of women in politics—Ijeoma Oluo exposes the devastating consequences of white male supremacy on women, people of color, and white men themselves.

Mediocre investigates the real costs of this phenomenon in order to imagine a new white-male identity, one free from racism and sexism. As provocative as it is essential, this book will upend everything you thought you knew about American identity and offers a bold new vision of American greatness.

“A master class in understanding how systems of domination working relentlessly in the service of white male patriarchy not only harm all women and people of color but ultimately hinder white men themselves from reaching greatness.” —Michael Eric Dyson, New York Times bestselling author
“Oluo deftly combines history and sociological study with personal narrative, and the result is both uncomfortable and illuminating.” —Washington Post
“Oluo narrates her insightful writing in a confident and clear tone. Her voice is a welcoming guide as she delves deep into her study of the legacy of white male supremacy in America and the threat it poses to all, including white men themselves….Listeners will be moved, disturbed, and inspired by her words, compelled to listen again, and ready to change the world for the better.” —AudioFile

Ijeoma Oluo is the author of the New York Times bestseller So You Want to Talk about Race. Her work on race has been featured in the New York Times and the Washington Post. She has twice been named to the Root 100, and she received the 2018 Feminist Humanist Award from the American Humanist Association.