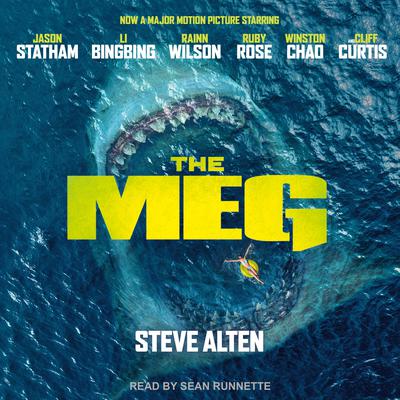 Meg: A Novel of Deep Terror with Meg: Origins

On a top-secret dive into the Pacific Ocean's deepest canyon, Jonas Taylor found himself face-to-face with the largest and most ferocious predator in the history of the animal kingdom. The sole survivor of the mission, Taylor is haunted by what he's sure he saw but still can't prove exists—Carcharodon megalodon, the massive mother of the great white shark. The average prehistoric Meg weighs in at twenty tons and could tear apart a Tyrannosaurus rex in seconds. Written off as a crackpot suffering from post-traumatic stress disorder, Taylor refuses to forget the depths that nearly cost him his life. With a PhD in paleontology under his belt, Taylor spends years theorizing, lecturing, and writing about the possibility that Meg still feeds at the deepest levels of the sea. But it takes an old friend in need to get him to return to the water, and a hotshot female submarine pilot to dare him back into a high-tech miniature sub. Diving deeper than he ever has before, Taylor will face terror like he's never imagined, and what he finds could turn the tides bloody red until the end of time.

Steve Alten is the New York Times and internationally bestselling author of more than twenty novels, including The Loch, Meg, and the Domain trilogy. His work has been published in more than thirty countries and is being used in thousands of middle and high school curricula as part of Adopt-an-Author, a free teen reading program used nationwide to encourage reluctant readers.