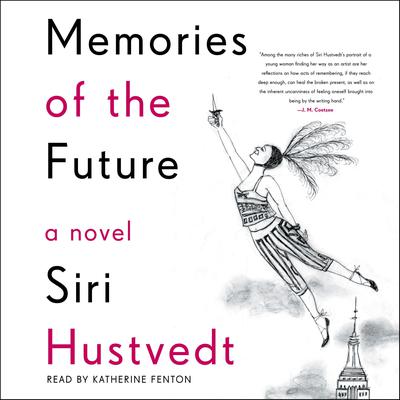 Memories of the Future: A Novel

A provocative, exuberant novel about time, memory, desire, and the imagination from the internationally bestselling and prizewinning author of The Blazing World, Memories of the Future tells the story of a young Midwestern woman’s first year in New York City in the late 1970s and her obsession with her mysterious neighbor, Lucy Brite.

As she listens to Lucy through the thin walls of her dilapidated building, S.H., aka “Minnesota,” transcribes her neighbor’s bizarre and increasingly ominous monologues in a notebook, along with sundry other adventures, until one frightening night when Lucy bursts into her apartment on a rescue mission.

Forty years later, S.H., now a veteran author, discovers her old notebook, as well as early drafts of a never-completed novel while moving her aging mother from one facility to another. Ingeniously juxtaposing the various texts, S.H. measures what she remembers against what she wrote that year and has since forgotten to create a dialogue between selves across decades. The encounter both collapses time and reframes its meanings in the present.

Elaborately structured, intellectually rigorous, urgently paced, poignant, and often wildly funny, Memories of the Future brings together themes that have made Hustvedt among the most celebrated novelists working today: the fallibility of memory; gender mutability; the violence of patriarchy; the vagaries of perception; the ambiguous borders between sensation and thought, sanity and madness; and our dependence on primal drives such as sex, love, hunger, and rage.

“Like all the best postmodern novels, this metafictional investigation of time, memory, and the mutating self is as playful as it is serious.” —Kirkus Reviews
“Memories of the Future shines in its observations on the fluidity of time and the ways in which one’s older and younger selves can coexist.” —Minneapolist Star Tribune
“A fascinating shape-shifter of a novel.” —Publishers Weekly (starred review)
“Katherine Fenton is the ideal narrator for Hustvedt’s latest novel…Fenton’s clear enunciation and skilled phrasing help listeners navigate both the shifting time periods and the unusual narrative structure…The flawless pacing of the narration, with increases in speed to replicate the frenetic rhythms of city life and the slowing of tempo to illuminate S.H.‘s childhood remembrances, is impressive…Winner of the AudioFile Earphones Award.” —AudioFile
“Her sentences dance with the elation of a brilliant intellect romping through a playground of ideas, and her prose is just as lively.” —Washington Post

Siri Hustvedt is an award-winning novelist and author of a book of poetry, seven novels, four collections of essays, and a work of nonfiction. Her many awards include the International Gabarron Prize for Thought and Humanities and the Los Angeles Book Prize for Fiction for The Blazing World, which was also longlisted for the Man Booker Prize. In 2019, she won an award for literature from the American Academy of Arts and Letters, the European Essay Prize (Charles Veillon) for The Delusions of Certainty, a book-length essay on the mind-body problem, and the prestigious Princess of Asturias Award for Literature in Spain. She has a PhD in English literature from Columbia University and is a lecturer in psychiatry at Weill Cornell Medical College. Her scholarly work is interdisciplinary, and she has published papers in various academic and scientific journals.