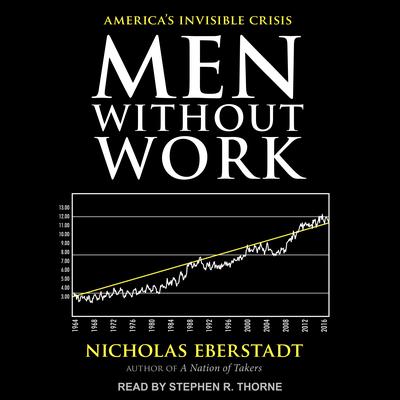 By one reading, things look pretty good for Americans today: the country is richer than ever before and the unemployment rate is down by half since the Great Recession.

But a closer look shows that something is going seriously wrong. This is the collapse of work—especially among America's men. Political economist Nicholas Eberstadt shows that while "unemployment" has gone down, America's work rate is also lower today than a generation ago—and that the work rate for U.S. men has been spiraling downward for half a century. Astonishingly, the work rate for American males aged twenty-five to fifty-four—or "men of prime working age"—was actually slightly lower in 2015 than it had been in 1940: before the War, and at the tail end of the Great Depression.

Today, nearly one in six prime working age men has no paid work at all—and nearly one in eight is out of the labor force entirely, neither working nor even looking for work. This new normal of "men without work," argues Eberstadt, is "America's invisible crisis."

So who are these men? How did they get there? What are they doing with their time? And what are the implications of this exit from work for American society?

An unsettling portrait not just of male unemployment, but also of lives deeply alienated from civil society. —New York Times

Nicholas Eberstadt, a political economist and a demographer by training, holds the Henry Wendt Chair in Political Economy at the American Enterprise Institute. He is also a senior advisor to the National Bureau of Asian Research, a commissioner on the U.S. Key National Indicators Council, and a member of the Global Agenda Council for the World Economic Forum. He researches and writes extensively on economic development, foreign aid, global health, demographics, and poverty. In 2012, he wrote A Nation of Takers: America’s Entitlement Epidemic and won the Bradley Prize.