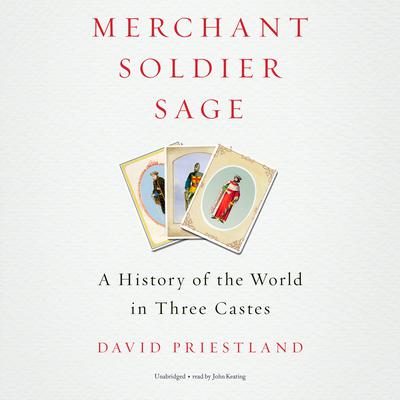 Merchant, Soldier, Sage: A History of the World in Three Castes

We are now living in an age of merchants, but it was not always so. The history of civilization, in large part, is a story of a battle between agrarian aristocracy, the military, and a class of learned experts, or priests. Yet in seventeenth-century England and in the Netherlands, another group entered the mêlée for power: the merchants. For the last four decades, the merchant’s power has been unfettered.

In Merchant, Soldier, Sage, acclaimed Oxford scholar David Priestland proposes a radical new approach to understanding today’s balance of power and analyzes the societal and economic historical conditions required for one of these three value systems to dominate. Priestland asserts that, in the wake of the Great Recession, the weakened and discredited merchant still clings to power—but the world is again in the midst of a period of upheaval.

“We have here a gripping, argument-led history, effortlessly moving between New York, Tokyo and Berlin, from the Reformation to the 2008 economic crisis…Here, at last, is a work that places the current crisis in a longer history of seismic shifts in the balance of social power.” —BBC History Magazine
“Concise but extremely ambitious…well worth pondering and reflecting on…Among the many contributions to the dissection of our current predicament, this is surely one of the most thought-provoking.” —The Guardian (London)
“In illustrating these larger processes of caste conflict and caste collaboration, the author offers crisp portraits of entrepreneurs, economists, and warriors…[with] sparkling prose and…arresting comparisons.” —Financial Times (London)
"[An] investigation into the financial crisis of 2008 and how civilization’s failure to properly rein in the merchant in its wake might negatively affect the future.” —Daily Beast
“Priestland is consistently engaging, whether in his discussion of the marshaling of Confucius’s teachings for political ends or in pegging former President George W. Bush as a warrior….Ambitious, well organized, and insightful.” —Publishers Weekly
“Useful, often-clarifying trifocals through which to view the world.” —Kirkus Reviews
“Lively, opinionated…The aim of this book is to use the lessons of history to understand the current financial crisis…Priestland has some interesting things to say about why power relationships shift and what happens when they do.” —The Economist (London)

David Priestland is a British historian. He is university lecturer in modern history at the University of Oxford and is Fellow of St Edmund Hall. He has studied Communism in all its forms for many years, in both Oxford and Moscow State Universities. He is the author of several books, including Merchant, Soldier, Sage; Stalinism and the Politics of Mobilization, and The Red Flag which was shortlisted for the Longman/History Today prize.