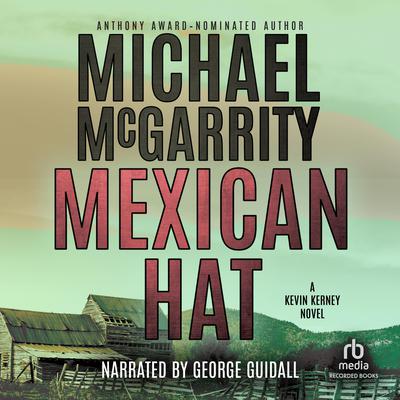 “Exciting…McGarrity blew critical and commercial socks off…with Tularosa…now he goes for the boots.” —Chicago Tribune
“Mexican Hat has it all—cattle ranchers, the US Forest Service, militia groups, poachers, land-grabbing murderers, Game and Fish Department investigators and locals who just want to be left alone.” —Albuquerque Journal
“McGarrity delivers on the promise of his accomplished debut…A large cast of tough, believable characters brings life to a complex, action-filled plot…[McGarrity] ingeniously orchestrates character, place, action, history, and relationships into another outstanding novel.” —Publishers Weekly (starred review)
“George Guidall lends dignity to the limping, 40-something, would-be rancher, who has taken a summer job as a forest ranger. Guidall enlivens the innumerable characters involved in a sixty-year-old family feud, a militia movement, Mexican-American issues, small-town politics and more…His renderings of the stunning landscapes evoke the author's love of the Southwest, luring listeners to the story with the setting.” —AudioFile
“Features authentic detail and realistic description. The dialogue has an easy, natural flow…This is an exciting, well-crafted story with a likable, sympathetic hero, appealing heroine and secondary characters, and appropriately vile villains. Recommended.” —Library Journal
“The equal of its acclaimed predecessor, Tularosa. The contemporary western setting is carefully drawn and functions as a character as well as a backdrop. Kerney himself has a number of reasons to be bitter over the turns his life has taken but never succumbs to them. He’s tough but not a superman; he’s sharp but not Holmes. He’s a good man willing to do difficult, often painful work. He’s very much worth getting to know.” —Booklist
“A bulging taco of a novel, overstuffed with villains, old secrets, crooked cops, and bang bang bang…written with a chemistry and majesty that’ll make it irresistible to Tony Hillerman fans.” —Kirkus Reviews

Michael McGarrity is a New Mexican author and former deputy sheriff of Santa Fe county. He received degrees from the University of New Mexico and the University of Iowa in English and psychology; he is also a graduate of the New Mexico Law Enforcement Academy. He has written a dozen crime-suspense novels, all set in New Mexico. Some of his works include Serpent Gate, The Judas Judge, Under the Color of Law, The Big Gamble, and Hard Country. He has recieved many nominations for his work, and in 2004, McGarrity received the New Mexico Governor’s Award for Excellence in Literature. He has also published a number of articles in professional journals on a variety of topics, including drug treatment interventions, program assessment and evaluations, and therapy programs for children. In addition to being a law enforcement officer, he has been an investigator and caseworker for the New Mexico Public Defender’s Office and has taught at several colleges and universities. He has been instrumental in establishing a number of scholarships, including the Hillerman-McGarrity Creative Writing Scholarship at the University of New Mexico, the Richard Bradford Memorial Creative Writing Scholarship at Santa Fe Community College, and others. He lives in Santa Fe, New Mexico with his wife.