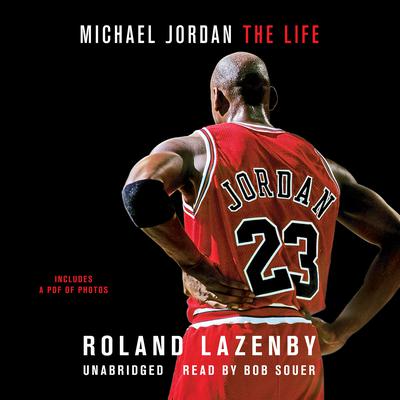 A Publishers Weekly Pick of the Week, May 2014

When most people think of Michael Jordan, they think of the beautiful shots, his body totally in sync with the ball, hitting nothing but net. He is responsible for incredible moments so ingrained in basketball history that they have their own names: the Shrug, the Shot, the Flu Game. But for all his greatness, there’s also a dark side to Jordan: a ruthless competitor, a gambler. There has never been a biography that balanced these personas—until now.

Drawing on personal relationships with Jordan’s coaches; countless interviews with friends, teammates, family members, and Jordan himself; and a career in the trenches covering Jordan in college and the pros, Roland Lazenby provides the first truly definitive study of Jordan: the player, the icon, and the man.

“It's not every day that I'm blown away by a book about a sports figure. But Michael Jordan: The Life, by Roland Lazenby, ranks up there with the very best…For the first time I understand what makes Michael Jordan tick. I was captivated, fascinated, and beguiled from beginning to end.” —Peter Golenbock, New York Times bestselling author
“When a world-class biographer writes about a world-class athlete, you have a biography for the ages. This is the ultimate study of Michael Jordan, and I know you will be as captivated as I was.” —Pat Williams, Orlando Magic senior vice president and coauthor of Coach Wooden’s Greatest Secret
“A lot has been written about arguably the greatest basketball player of all time, Michael Jordan, but Roland Lazenby’s Michael Jordan: The Life is easily the definitive version. The journalist has covered Jordan’s career for nearly thirty years, and his knowledge of the game and of this miraculous player shows in what is one of the best sports biographies in years.” —Parade
“A comprehensive look at the life and times of the man and the legend….A great work for any sports enthusiast and B-ball fan to read about one of the best that ever came to the game.” —Ebony
“What makes this portrayal especially worthwhile is the long trail Lazenby follows before the awesome career even begins.” —New York Times Book Review
“An utterly definitive biography….The most comprehensive attempt yet made to explain the factors that have gone into producing the most famous basketball player and marketing phenom in the history of world sports….I don’t know how it would be possible to write a more complete biography of him.” —Chicago Tribune
“Right from its early pages it’s clear that Roland Lazenby’s biography of Michael Jordan is in full-press mode to be the best volume ever written on perhaps basketball’s greatest player….Lazenby’s a born researcher, and some serious legwork went into gathering all of the quotes and facts here, which add up to a kind of Jordan-centric encyclopedia.” —Boston Globe
“Roland Lazenby’s new biography of Michael Jordan is as breathtaking as a dunk by ‘His Airness’…A richly detailed, thoroughly researched book…Lazenby expertly sifts through the myths to produce a definitive portrait of Michael Jordan.” —Tampa Tribune
“The definitive portrait….The dream of the non-fiction writer is to condemn future books on the same subject to irrelevance. It’s possible Lazenby has achieved this lofty goal: nothing more needs to be written about Jordan.” —Macleans
“Lazenby’s book is impressive in its research. There are details bound to surprise even the most die-hard Bulls fan.” —Daily Herald (Arlington Heights)
“Lazenby’s thoroughly enjoyable biography is an impressive portrait of a man consumed by his competitive ambitions. It is also by far the most complete book on Michael Jordan to date, covering every aspect of his life from his North Carolina ancestors to his current ownership of the Charlotte Bobcats….Essential reading for all sports fans and particularly for those interested in American cultural history and popular culture.” —Library Journal (starred review)
“Michael Jordan’s role as handsome pitchman/basketball champion belies a complicated life in this hefty, revelatory biography by veteran basketball author Lazenby…Yields a fascinating examination into the lonely, prideful man behind the glimmering icon.” —Publishers Weekly
“Lazenby’s resources include the vast printed Jordan library as well as interviews conducted recently, along with gleanings from the author’s years on the NBA beat. Readers who have immersed themselves in the Jordan ‘genre’ will be familiar with much of what’s detailed here, but MJ’s life is a movie worth watching again, and Lazenby adds enough deleted scenes to add some oomph to the familiar story.” —Booklist
“Studded with insights.” —Kirkus Reviews
“Michael Jordan’s drive, demons, and pure talent are well documented in this audiobook…Narrator Bob Souer uses a staccato rhythm reminiscent of a sports announcer calling a basketball game to great effect. His command of the material propels the listener and captures the essence of this single-minded icon. Even if listeners know only the basics of the game, hearing the coalescence of the psychology and politics that surges onto the court with the players for every game makes this as exciting as any thriller. Winner of AudioFile Earphones Award.” —AudioFile

Roland Lazenby is the author of numerous sports books, including Blood on the Horns: The Long Strange Ride of Michael Jordan’s Chicago Bulls and Bull Run!, which was named the Independent Publishers Association’s 1997 Book of the Year. His work has appeared in Sport, Sporting News, and the Chicago Sun-Times.