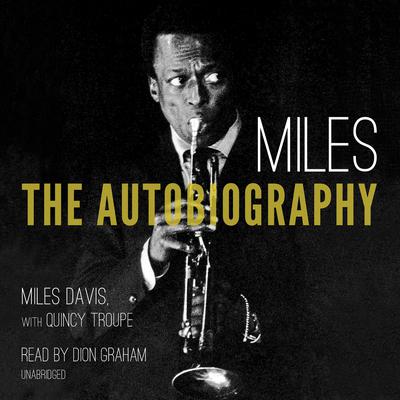 By Miles Davis , with Quincy Troupe
Read by Dion Graham

Universally acclaimed as a musical genius, Miles Davis was one of the most important and influential musicians in the world. Here, Miles speaks out about his extraordinary life.

Miles: The Autobiography, like Miles himself, holds nothing back. For the first time Miles talks about his five-year silence, he speaks frankly and openly about his drug problem and how he overcame it, he condemns the racism he encountered in the music business and in American society in general, and he discusses the women in his life. But above all, Miles talks about music and musicians, including the legends he has played with over the years: Bird, Dizzy, Monk, Trane, Mingus, and many others.

Miles Davis (1926–1991), is one of the key figures in the history of jazz, and his place in vanguard of that pantheon is secure. As a trumpeter Davis was far from virtuosic, but he made up for his technical limitations by emphasizing his strengths: his ear for ensemble sound, unique phrasing, and a distinctively fragile tone. Drugs were prevalent on the club scene in this era, and by 1949 he had become a heroine addict. His disease kept his career in low gear until he cleaned up six years later, after which he collaborated with other musicians and formed numerous groups that went on to make highly acclaimed music. It is hard to overstate Davis’ contributions to jazz. In 1990 he received the Grammy Award for Lifetime Achievement, and jazz and rock musicians continue to regularly gather and record or perform pieces from Davis’ cannon.