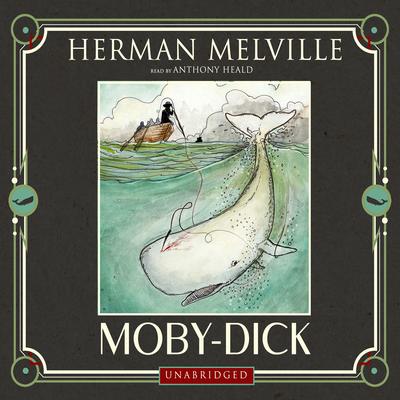 A BookRiot Pick of Classic Best Experienced in Audio

One of the great works of American literature, Moby-Dick is the epic tale of one man’s fight against a force of nature. The outcast youth Ishmael, succumbing to wanderlust during a dreary New England autumn, signs up for passage aboard a whaling ship. The Pequod sails under the command of the one-legged Captain Ahab, who has set himself on a monomaniacal quest to capture the cunning white whale that robbed him of his leg: Moby-Dick. Capturing life on the sea with robust realism, Melville details the adventures of the colorful crew aboard the ship as Ahab pursues his crusade of revenge, heedless of all cost. This masterfully symbolic drama of the conflict between man and his fate has a special intensity that listeners will not soon forget.

“The greatest of American novels.” —Atlantic Monthly
“An epic, rewarding, sea-worthy journey awaits you in one of literature’s classic tales.” —Amazon.com
“Narrator Anthony Heald not only creates vivid characterizations—Captain Ahab’s gruff mania, Starbuck’s doubtful sensitivity, the prophet Elijah’s visionary shakiness—he also dramatizes the many moods of the Pequod crew and the mercurial ocean itself. Heald’s voice has the range of a piano, and he uses it like a virtuoso. In one minute his reading can move from slow and languid, reflecting a dreamy day at sea, to alert and brisk, evoking the suspense of a whale sighting. Heald’s voice bristles dryly with humor or sinks with dread—a range necessary to tell this complex story of a man’s obsession with conquering an enigmatic white whale.” —AudioFile
“Even tenth-grade-me could have appreciated the book as read in Anthony Heald’s sardonic, Silence of the Lambs intonation. Generally speaking, witty books seem to have the most to gain in audio form…particularly when read by great voice artists.” —BookRiot (audio review)
“A work tantalizingly subversive, and yet somehow if not affirming at least forgiving of the blind destructiveness of human nature and of nature itself.” —Elizabeth Hardwick, American literary critic
“Responsive to the shaping forces of his age as only men of passionate imagination are, even Melville can hardly have been fully aware of how symbolical an American hero he had fashioned in Ahab.” —F. O. Matthiessen, literary critic