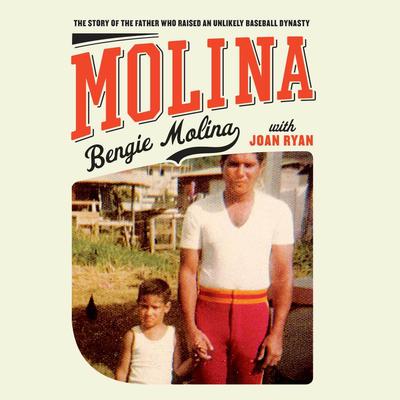 Molina: The Story of the Father Who Raised an Unlikely Baseball Dynasty

By Bengie Molina , with Joan Ryan
Read by Henry Leyva

The inspiring true story of the poor Puerto Rican factory worker, Benjamin Molina Santana, who against all odds raised the greatest baseball dynasty of all time: Molina's three sons Bengie, Jose, and Yadier have each earned two World Series rings, which is unprecedented in the sport, and his story is told by one of them, Bengie.

A baseball rules book. A tape measure. A lottery ticket. These were in the pocket of Bengie Molina's father when he died of a heart attack on the rutted Little League field in his Puerto Rican barrio. The items serve as thematic guideposts in Molina's beautiful memoir about his father, who through baseball taught his three sons about loyalty, humility, courage, and the true meaning of success. Bengie and his two brothers Jose and six-time All-Start Yadier became famous catchers in the Major Leagues and have six World Series Championships among them.

Only the DiMaggio brothers can rival the Molinas as the most accomplished siblings in baseball history. Bengie was the least likely to reach the majors. He was too slow, too sensitive and too small. But craving his beloved fathers respect, Bengie weathered failure after deflating failure until one day he was hoisting a World Series trophy in a champagne-soaked clubhouse. All along he thought he was fulfilling his fathers own failed dream of baseball glory only to discover it had not been his fathers dream at all.

Written with the emotional power of sports classics such as Field of Dreams and Friday Night Lights, Molina is a love story between a formidable but flawed father and a son who, in unearthing answers about his fathers life, comes to understand his own.

“For three brothers to make it to the big leagues…and to appear, between them, in eight World Series to date is remarkable enough. What is just as remarkable is the backstory.” —Bob Costas, sports announcer and New York Times bestselling author
“A great book. Bengie honors his family, especially his Pai and Mai…Throughout the book, wonderful stories are combined with fascinating insights.” —Tony La Russa, MLB Hall-of-Famer
“It’s this year’s baseball book most likely to be made into a terrific movie.” —Chicago Tribune
“An affecting memoir…A simply told, deeply moving story, quite unlike the usual baseball book.” —Kirkus Reviews (starred review)
“A good baseball story, but an even better story of fathers, sons, and the importance of family.” —Booklist (starred review)
“One of the most heartfelt, earnest accounts of a son assuming his father’s dream…In precise and thoughtful prose, Molina celebrates his famous bloodline as well as his own success, mastering the game behind home plate with skill and style for the enjoyment of the fans.” —Publishers Weekly
“Less of a biography and more about the relationship between father and son…Molina’s obvious affection for his father, siblings, and entire family comes through on every page.” —Library Journal
“Narrator Henry Leyva is beautifully faithful to the heartfelt emotion that Bengie Molina wraps into his memoir…Leyva seamlessly transitions between English and Spanish, adding to the authentic atmosphere of the story.” —AudioFile

Benjamin José “Bengie” Molina is a former Major League Baseball catcher who has played for the Anaheim Angels, the Toronto Blue Jays, and the San Francisco Giants. His brothers, Yadier and José, are also major league catchers. Bengie holds two World Championship rings, and two Gold Glove Awards. He is now the first base coach and catching instructor for the Texas Rangers.