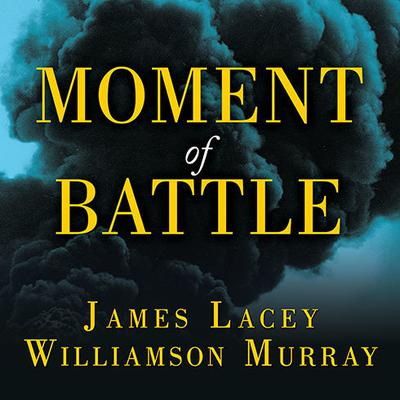 Moment of Battle: The Twenty Clashes That Changed the World

By James Lacey and Williamson Murray
Read by Kevin Foley

In the grand tradition of Edward Creasy’s classic Fifteen Decisive Battles of the World, James Lacey and Williamson Murray spotlight only those engagements that changed the course of civilization. In gripping narrative accounts they bring these conflicts and eras to vivid life, detailing the cultural imperatives that led inexorably to the battlefield, the experiences of the common soldiers who fought and died, and the legendary commanders and statesmen who matched wits, will, and nerve for the highest possible stakes. From the great clashes of antiquity to the high-tech wars of the twenty-first century, here are the stories of the twenty most consequential battles ever fought, including

Engaging, well written, and thoroughly researched, this book will appeal to amateur and professional historians alike. —Publishers Weekly
“Well-told military history can make for a gripping listening experience, and Kevin Foley’s narration brings out the best qualities of these authors’ storytelling abilities.” —AudioFile

James Lacey is the author of several books on military history, terrorism, and current affairs, including The First Clash, Keep from All Thoughtful Men, and Takedown. He is a widely published defense analyst who has written for Time, National Review, Foreign Affairs, and other publications. He currently teaches at the Marine Corps War College and Georgetown University.

Williamson Murray is the author of a wide selection of articles and books, including, with Allan R. Millett, the acclaimed A War to Be Won, and has held numerous distinguished academic chairs. He is presently a defense analyst at the Potomac Institute and teaches at the Naval War College.