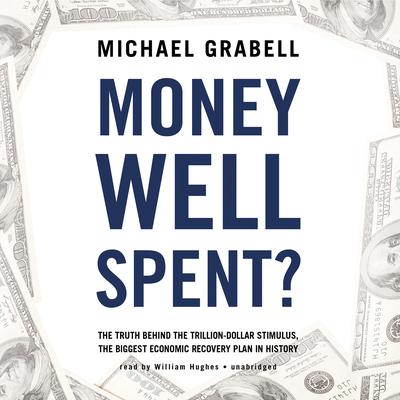 Money Well Spent?: The Truth behind the Trillion-Dollar Stimulus, the Biggest Economic Recovery Plan in History

The 2012 presidential campaign will, above all else, be a referendum on the Obama administration’s handling of the financial crisis, recalling the period when Obama’s “audacity of hope” met the austerity of reality. Central to this is the American Recovery and Reinvestment Act of 2009—the largest economic recovery plan in American history. Senator Mitch McConnell gave a taste of the enormity of the money committed: if you had spent $1 million a day since Jesus was born, it still would not add up to the price tag of the stimulus package.

The story of how this almost entirely partisan piece of legislation—Democrats voted for it, Republicans against it—was passed and, more importantly, how the money was spent and to what effect, is known barely at all. Stepping outside the political fray, ProPublica’s Michael Grabell offers a perceptive, balanced, and dramatic story of what happened to the taxpayers’ money, pursuing the big question through behind-the-scenes interviews and on-the-ground reporting in more than a dozen states across the country.

“Grabell does such a thorough job of cataloging…misdirected funds and misplaced priorities that one wonders how he settled on the inquisitive title.” —Wall Street Journal
“An important and eminently readable book.” — Dave Davies, NPR’s Fresh Air
“This thorough exploration of the stimulus will educate readers about where money went, not just in the focus cities but around the country, and the lasting impact of the Great Recession.” —Publishers Weekly
“A deeply reported, well-written account of a difficult topic to capture, partly because of the complexity and partly because the stimulus package remains a work in progress.” —Kirkus Reviews

Michael Grabell has been a reporter at ProPublica since 2008, producing stories for USA Today, Salon, NPR, MSNBC, and the CBS Evening News. Before joining ProPublica, he was a reporter at the Dallas Morning News. He has twice been a finalist for the Livingston Award for Young Journalists. He lives in New Jersey.