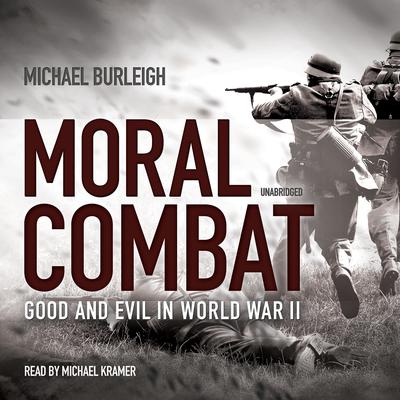 In this sweepingly ambitious overview of World War II, Michael Burleigh combines meticulous scholarship with a remarkable depth of knowledge and an astonishing scope. By exploring the moral sentiments of entire societies and their leaders and how such attitudes changed under the impact of total war, Burleigh presents listeners with a fresh and powerful perspective on a conflict that continues to shape world politics. Whereas previous histories of the war have tended to focus on grand strategy or major battles, Burleigh brings his painstaking scholarship and profound sensibility to bear on the factors that shaped choices that were life-and-death decisions. These choices were made in real time, without the benefit of a philosopher’s reflection, giving a moral content to the war that shaped it as decisively as any battle.

Although the Nazis and the Japanese had radically different moral universes from those of their Allied opponents, the Western Allies found themselves aligned with a no less cruel dictatorship after rejecting the option of appeasing aggression. The war was the sum of myriad choices made by governments, communities, and individuals, leading some to enthusiastically embrace evil and others to consciously reject it, with a range of more ambiguously human responses in between. Spanning both major theaters, Moral Combat sheds a revealing light on how entire nations changed under the shock of total war.

Emphasizing the role of the past in making sense of the present, Burleigh’s book offers essential insights into the choices we face today—in some circles it is always 1938 and every aggressor is a new Hitler. If we do go to war, we need to know what it will mean for the individuals who command and fight it. Original, perceptive, and astonishing in scholarship and scope, this is an unforgettable and hugely important work of Second World War history.

“Poses the moral questions to the people that mattered at the great turning points of a vast war…[A] bold, blunt, and sometimes beautiful defense of morality in history.” —Wall Street Journal
“This is a superb work of scholarship with fresh insights on nearly every page that will likely leave the reader asking hard and troubling questions long after finishing it…An exceptionally important book.” —Christian Science Monitor
“Michael Burleigh has long been one of our foremost writers on the importance of ethics in history, and in this deeply researched, closely argued, and well-written analysis of the moral issues thrown up by the Second World War, he has reached the zenith of his career.” —Telegraph (UK)
“As always the color and power of Burleigh’s prose is outstanding. When it comes to evoking the smell of a place, he is far and away our best history writer.” —Guardian (UK)
“This is Burleigh at his best.” —Independent (UK)
“Burleigh has written a powerful, gripping book that will be essential reading for an understanding of World War II…Worthy of anyone’s attention who is interested in that war.” —Washington Times
“Chilling…A deeply researched and vividly written book.” —Cleveland Plain Dealer
“Respected British historian Burleigh delivers a long, riveting account of awful events and the perverted reasoning behind them.” —Publishers Weekly (starred review)
“[Burleigh] refuses to conduct his thoroughly researched discussion according to the slippery rules of the faculty lounge or the theoretical constructs of a philosophy seminar…He rightly insists on acknowledging the messy, complex manner in which the history unfolded…Discerning and immensely rewarding.” —Kirkus Reviews (starred review)
“An incisive inquiry into World War II’s moral catastrophe.” —Booklist
“A good starting point for debates on morality in wartime.” —Library Journal

Michael Burleigh is the author of Earthly Powers, Sacred Causes, and The Third Reich: A New History, which won the Samuel Johnson Prize for Nonfiction. He is married and lives in London.