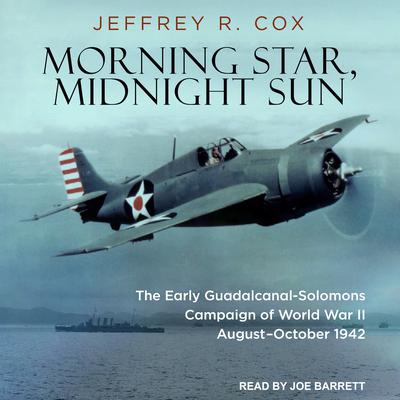 Following the disastrous Java Sea campaign, the Allies went on the offensive in the Pacific in a desperate attempt to halt the Japanese forces that were rampaging across the region. With the conquest of Australia a very real possibility, the stakes were high. Their target: the Japanese-held Soloman Islands, in particular the southern island of Guadalcanal.

Hamstrung by arcane pre-war thinking and a bureaucratic mind-set, the U.S. Navy had to adapt on the fly in order to compete with the mighty Imperial Japanese Navy, whose ingenuity and creativity thus far had fostered the creation of its Pacific empire. Starting with the amphibious assault on Savo Island, the campaign turned into an attritional struggle where the evenly matched foes sought to grind out a victory.

Following on from his hugely successful book Rising Sun, Falling Skies, Jeffrey R. Cox tells the gripping story of the first Allied offensive of the Pacific War, as they sought to prevent Japan from cutting off Australia and regaining dominance in the Pacific.

Jeffrey R. Cox is an independent military historian specializing in World War II, Ancient Greece, and Ancient Rome. Cox holds a degree in national security policy studies from the Ohio State University and a doctorate of jurisprudence from Indiana University School of Law. He is a contributor to Military History Online and resides in Indianapolis.