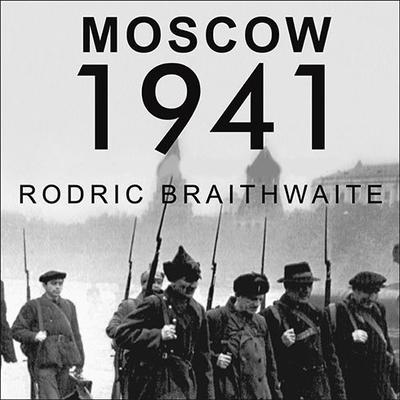 The 1941 Battle of Moscow—unquestionably one of the most decisive battles of World War II—marked the first strategic defeat of the German armed forces in their seemingly unstoppable march across Europe. The Soviets lost many more people in this one battle than the British and Americans lost in the whole of the Second World War. Now, with authority and narrative power, Rodric Braithwaite tells the story in large part through the individual experiences of ordinary Russian men and women. The narrative is set firmly against the background of Moscow and its people, beginning in early 1941, when the Soviet Union was still untouched by the war raging to the west. We see how—despite a mass of secret intelligence—the breaching of the border by the Wehrmacht in June took the country by surprise, and how, when the Germans pushed to Moscow in November, the Red Army and the capital's inhabitants undertook to defend their city, finally, in the winter of 1941–1942, turning the Germans back on the city's very outskirts. Braithwaite's dramatic, richly illustrated narrative of the military action offers telling portraits of Stalin and his generals. By interweaving the personal remembrances of soldiers, politicians, writers, artists, workers, and schoolchildren, he gives us an unprecedented understanding of how the war affected the daily life of Moscow and of the extraordinary bravery, endurance, and sacrifice—both voluntary and involuntary—that was required of its citizens.

Accessible and unforgettable…. [Vance's] reading of this book is engaging and...brings this book to life, making it ideal listening. —Large Print Reviews
“The reader staggers from laughter to tears, while never forgetting that blood is flowing.” —Daily Mail (London)
“Braithwaite, who was Britain’s Ambassador to Moscow from 1988 to 1992, interviewed a remarkable range of Muscovites for the book, from students and nurses who joined the fight to a metro worker who dug Stalin’s secret bunker, and he has produced a symphonic evocation of a great city at war.” —New Yorker
“A wide-ranging and excellent account…Braithwaite never shirks the terrible truths.” —Sunday Times (London)

Rodric Braithwaite was British ambassador to Moscow during the critical years of perestroika and the collapse of the Soviet Union, the failed coup of August 1991, and the rise of Boris Yeltsin. With his long experience of Russia, on good personal terms with Mikhail Gorbachev, he was in a privileged position close to the center of Russia’s changing relationship with the West. Rodric Braithwaite was based in Moscow from September 1988 to May 1992. He retains business and educational interests in Russia.