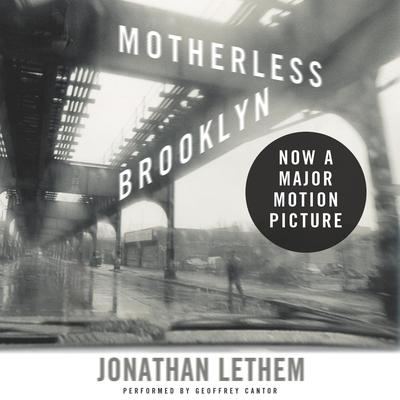 Winner of the CWA Gold Dagger for Crime Fiction, 1999

An Esquire Magazine Best Book of the Year, 1999

From America's most inventive novelist, Jonathan Lethem, comes this compelling and compulsive riff on the classic detective novel.

Lionel Essrog is Brooklyn's very own Human Freakshow, an orphan whose Tourettic impulses drive him to bark, count, and rip apart language in startling and original ways. Together with three veterans of the St. Vincent's Home for Boys, he works for small-time mobster Frank Minna's limo service cum detective agency. Life without Frank, the charismatic King of Brooklyn, would be unimaginable. When Frank is fatally stabbed, Lionel's world is suddenly turned upside-down, and this outcast who has trouble even conversing attempts to untangle the threads of the case, while trying to keep the words straight in his head. A compulsively involving a and totally captivating homage to the classic detective tale.

“Finding out whodunit is interesting enough, but it’s more fun watching Lethem unravel the mysteries of his Tourettic creation.” —Time
“Immerses us in the mind’s dense thicket, a place where words split and twine in an ever-deepening tangle.” —New York Times Book Review
“Who but Jonathan Lethem would attempt a half-satirical cross between a literary novel and a hard-boiled crime story narrated by an amateur detective with Tourette’s syndrome?…The dialogue crackles with caustic hilarity…Lethem is a verbal performance artist…Unexpectedly moving.” —Boston Globe
“Superbly balances beautiful writing and an engrossing plot.” —Atlanta Journal Constitution
“Motherless Brooklyn, is, among other things, a tale of orphans, a satire of Zen in the city, and a murder mystery.” —Time Out New York
“Lethem’s sixth sense for the secret enchantments of language and the psyche…make [Motherless Brooklyn] well worth the ride.” —Publishers Weekly
“The author has applied his trademark genre-bending style to fine effect. Already well known among critics for his literary gifts, Lethem should gain a wider readership with this appealing book’s debut.”  —Library Journal
“A brilliantly imagined riff on the classic detective tale…Don’t miss this one.” —Kirkus Reviews
“Wonderfully inventive, slightly absurdist…[Motherless Brooklyn] is funny and sly, clever, compelling, and endearing.” —USA Today
“Philip Marlowe would blush. And tip his fedora.” —Newsweek
“Most rewarding…Delightfully oddball.” —New Yorker
“The best novel of the year…Utterly original and deeply moving.” —Esquire
“In Essrog…Lethem has fashioned a lovably strange man-child and fill his cross-wired mind with a crashing, self-referential interior monologue that is at once laugh-out-loud funny, tender, and in the honest service of a terrific story.” —Washington Post Book World
“Gripping, mournful, touching, and comic…One of the greatest feats of first-person narration in recent American fiction.” —Washington Post
“With one unique and well-imagined character, Jonathan Lethem has turned a genre on its ear. He doesn’t just push the envelope, he gives it a swift kick…A tour de force.” —Denver Post
“Jonathan Lethem is one of the most original voices among younger American novelists…His imagination [is] marvelously fertile.” —Newsday

Jonathan Lethem is the author of a number of critically acclaimed novels, including The Fortress of Solitude and the National Book Critics Circle Award winner Motherless Brooklyn. Lethem’s stories and essays have appeared in the New Yorker, Harper’s, Rolling Stone, Esquire, and the New York Times, among others. He lives in New York City.