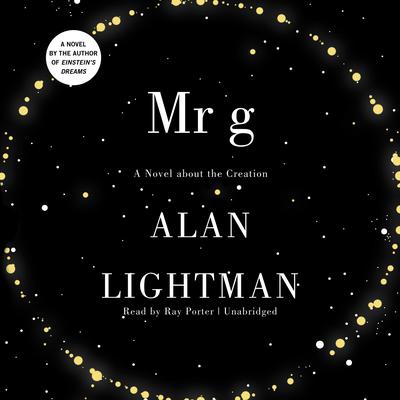 Mr. g: A Novel about the Creation

With echoes of Calvino, Rushdie, and Saramago, this is a stunningly imaginative work that celebrates the tragic and joyous nature of existence on the grandest possible scale.

“As I remember, I had just woken up from a nap when I decided to create the universe.” So begins Alan Lightman’s playful and profound new novel, Mr. g, the story of Creation as narrated by God. Bored with living in the shimmering Void with his bickering Uncle Deva and Aunt Penelope, Mr. g creates time, space, and matter—then moves on to stars, planets, consciousness, and finally intelligent beings with moral dilemmas.

But even the best-laid plans can go awry, and Mr. g discovers that with his creation of space and time come unforeseen consequences—especially in the form of the mysterious Belhor, a clever and devious rival. An intellectual equal to Mr. g, Belhor delights in provocation: he demands an explanation for the inexplicable, requests that intelligent creatures not be subject to rational laws, and maintains the necessity of evil. As Mr. g watches his favorite universe grow into maturity, he begins to understand how the act of creation can change the Creator himself.

“Here is the creation of the universe and the young creator who grapples with what he has made—and ultimately with responsibility and loss…A gem of a novel that is strange, witty, erudite, and alive with Lightman’s playful genius.” —Junot Díaz, New York Times bestselling author
“A soulful riff on the birth and eventual demise of our universe…Lightman the humanist allows room for the compatibility of rationality with spirituality and mystery, while Lightman the scientist plays devil’s advocate with the partisans of Genesis, blinding them with logic.” —New York Times Book Review
“This delightful novel takes the reader on a lighthearted romp through the development of the universe from the big bang to its cold, dark end, addressing along the way some of the big questions that inevitably arise from the development of intelligent life.”  —Jerome Friedman, Nobel Prize–winning physicist
“A scientific vision laced with the mirthful aura of divinity…Aglow with wonder.”   —Washington Post
“Just as he did with his incomparable Einstein’s Dreams, Alan Lightman again surprises us with a work that is utterly original in both form and content. Mr. g is a philosophical fable which is at turns hilarious and moving, rendered with a literary hand so deft that the weightiest metaphysical topics levitate into pure delight.” —Rebecca Newberger Goldstein, philosopher and author
“It would not seem possible for Alan Lightman to match his earlier tour de force, Einstein’s Dreams, but in Mr. g he has done so—with wit, imagination, and transcendent beauty.” —Anita Desai, Indian novelist
“With iridescent precision, fairy-tale wonder, and brainy humor, Lightman crafts an enthralling and provocative cosmic parable that offers a startlingly fresh perspective on the mysteries of the universe and the paradoxical human condition.” —Booklist (starred review)
“A touching, imaginative rendition of God’s creation of the universe…The immortal characters are changed by their brush with the enterprising, however doomed, mortals, bringing this elucidating treatment of quantum physics to an affecting, hopeful conclusion.”  —Publishers Weekly
“Though Lightman’s clever irreverence recalls Salman Rushdie and Kevin Brockmeier, his plainspoken style lends the book a fitting earnestness…Readers who don’t mind the liberties the author takes with the sacred might enjoy this scienced fiction.” —Library Journal
“Lightman is able to write with the keen insight of a scientist and the lyricism of a poet…He brilliantly conveys a sense of the awesome power and mystery of the universe’s origins. Whether you are a believer, an atheist, or occupy some position in between, if you approach it with an open mind you are certain to find something worth pondering in this delightfully original novel. Who knew cosmology could be such a blast?” —Shelf Awareness
“Profoundly inventive.” —About.com

Alan Lightman is the author of several novels, including Einstein’s Dreams, a New York Times and international bestseller, and The Diagnosis, a finalist for the 2000 National Book Award. He is also the author of several collections of essays and numerous books on science. His work has appeared in the Atlantic, Granta, the New Yorker, the New York Review of Books, and Nature, among many other publications. A theoretical physicist as well as a writer, he has served on the faculties of Harvard and MIT, where he was the first person to receive a dual faculty appointment in science and the humanities.