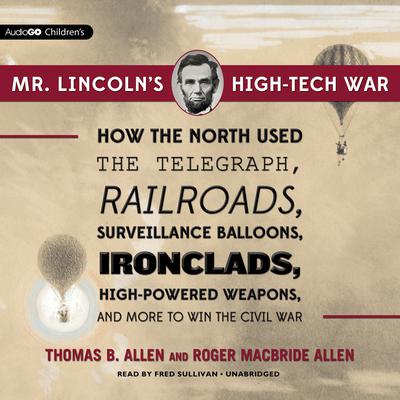 By Thomas B. Allen and Roger Macbride Allen
Read by Fred Sullivan

Thomas B. Allen's expertise in military history and strategy is combined with Roger MacBride Allen's knowledge of technology to reveal a lesser known yet fascinating side of the sixteenth president of the United States. Their authoritative narrative reveals Lincoln as our nation's first hands-on commander-in-chief, whose appreciation for the power of technology plays a critical role in the North's Civil War victory over the less developed South.

We meet Lincoln as he exchanges vital telegraph messages with his generals in the field; we witness his inspection of new ship models at the navy yard; we view the president target shooting with the designer of a new kind of rifle; and we follow Lincoln, the man of action, as he leads a daring raid to recapture Norfolk, Virginia. The book's historic sweep also sets Abraham Lincoln in the context of his military era: we learn about the North's Anaconda Plan and the South's counter strategies and how the concept of total war replaced the old Napoleonic way of fighting.

Readers will come away with a rich sense of a leader who lived through one of the most exciting ages of technological and social change in America. Mr. Lincoln's High-Tech War brings alive a time when the railroad brought soldiers to and from the battlefields, when hot-air balloons were used for surveillance, and when ironclad warships revolutionized naval warfare.

“Well researched and clearly written, the book discusses the course of the Civil War in terms of the development of new technology, from the ironclad and the submarine to the rapid-fire, repeating rifle and the use of railroads to carry troops and supplies…readers whose knowledge of the Civil War comes from historical novels and battle-by-battle historical accounts will gain a fascinating perspective on why the war progressed as it did and how it was ultimately won.” —Booklist (starred review)
“The lively, well-researched text makes it clear that Lincoln grasped the concept of ‘total war’ and did not hesitate to exploit the latest know-how to ensure victory…this book is a vital addition to the Lincoln shelf and an exceptional and novel approach for students investigating the Civil War.” —School Library Journal
“It is difficult to imagine a reader not finding something worth learning from this book.” —VOYA

Roger MacBride Allen is the author of numerous science fiction novels, including a number in the Star Wars universe, as well as his own Chronicles of Solace space opera trilogy. He graduated from Boston University with a degree in journalism and lives in Maryland.