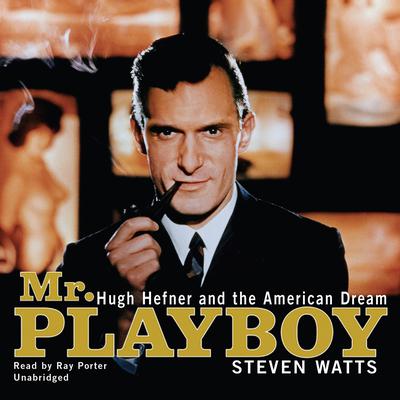 Gorgeous young women in revealing poses; extravagant mansion parties packed with celebrities; a hot-tub grotto, elegant smoking jackets, and round rotating beds; the hedonistic pursuit of uninhibited sex—put these images together and a single name springs to mind: Hugh Hefner. From his spectacular launch of Playboy magazine and the dizzying expansion of his leisure empire to his recent television hit The Girls Next Door, the publisher has attracted public attention and controversy for decades. But how did a man who is at once socially astute and morally unconventional, part Bill Gates and part Casanova, also evolve into a figure at the forefront of cultural change?

In Mr. Playboy, historian and biographer Steven Watts argues that, in the process of becoming fabulously wealthy and famous, Hefner has profoundly altered American life and values. Granted unprecedented access to the man and his enterprise, Watts traces Hef's life and career from his Midwestern, Methodist upbringing and the first publication of Playboy in 1953 through the turbulent sixties, self-indulgent seventies, reactionary eighties, and traditionalist nineties up to the present. He reveals that from the beginning Hefner believed he could overturn social norms and take America with him.

Throughout this fascinating biography, Watts offers singular insights into the real man behind the flamboyant public persona. He shows Hefner's personal dichotomies—the pleasure seeker and the workaholic, the consort of countless Playmates and the genuine romantic, the family man and the Gatsby-like host of lavish parties at his Chicago and Los Angeles mansions who enjoys well-publicized affairs with numerous Playmates, the fan of life's simple pleasures who hobnobs with the Hollywood elite. Punctuated with descriptions and anecdotes of life at the Playboy Mansions, Mr. Playboy tells the compelling and uniquely American story of how one person with a provocative idea, a finger on the pulse of popular opinion, and a passion for his work altered the course of modern history.

“[F]ascinating…offers readers new insights into the life of one of the most renowned entrepreneurs of the twentieth century. Ray Porter gives a rousing, commanding reading that exercises his captivating voice. His strong voice contains a certain journalistic integrity that holds the listener’s attention, and his unbiased tone allows listeners to draw their own conclusions about Hefner.” —Publishers Weekly
“Steven Watts’ biography presents a more complex personality lurking behind the pipe and smoking jacket, and Ray Porter’s courtly manner suggests indignation, and near envy, over Hefner’s excesses. The tension is well suited to the tangled web of contradictions that Hefner embodies.” —AudioFile
“Porter’s rich, resonant reading cruises along at a comfortable, relaxed gait. Given the wealth of information…Porter’s delivery could become monotonous, but he modulates his tones, bringing emphasis and clarity to the details…Webb brings legitimate research to this reliable account of an American icon. Porter’s strong reading makes this extremely palatable.” —Booklist
“[A] nuanced portrait of Hefner’s life that also serves as a panorama of hip culture from the 1950s onward…Probably the last word on the man behind a million adolescent fantasies.” —Kirkus Reviews

Steven Watts is a professor of history at the University of Missouri. He is the author of The People’s Tycoon: Henry Ford and the American Century and The Magic Kingdom: Walt Disney and the American Way of Life.