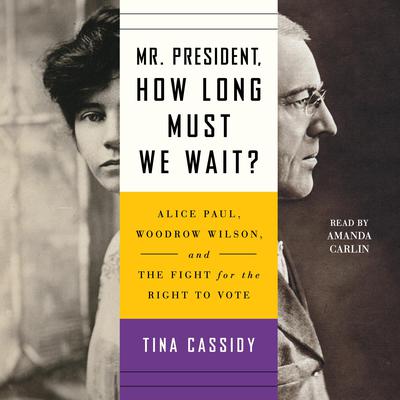 Mr. President, How Long Must We Wait?: Alice Paul, Woodrow Wilson, and the Fight for the Right to Vote

An eye-opening, inspiring, and timely account of the complex relationship between notable suffragist Alice Paul and President Woodrow Wilson in her fight for women’s equality.

Woodrow Wilson lands in Washington, DC in March of 1913, a day before he is set to take the presidential oath of office. Expecting a throng of onlookers, he is instead met with minimal interest as the crowd and media alike watch a twenty-five-year-old Alice Paul organize 8,000 suffragists in a first-of-its-kind protest led by a woman riding a white horse just a few blocks away from the Washington platform. The next day, the New York Times calls the procession “one of the most impressively beautiful spectacles ever staged in this country.”

Mr. President, How Long Must We Wait? weaves together two storylines: Paul’s and Wilson’s, two seemingly complete opposites who had more in common than either one could imagine. Paul’s procession led her to be granted a one-on-one meeting with President Woodrow Wilson, one that would lead to many meetings and much discussion, though little progress. With no equality in sight and patience wearing thin, Paul organized the first group to ever picket on the White House lawn—night and day, through sweltering summer mornings and frigid fall nights.

From solitary confinement, hunger strikes, and mental institutions to sitting right across from President Woodrow Wilson, Mr. President,How Long Must We Wait? reveals the inspiring, near-death journey it took, spearheaded in no small part by Paul's leadership, to grant women the right to vote in America. A rousing portrait of a little-known feminist heroine and an inspirational exploration of a crucial moment in American history—one century before the Women’s March—this is a perfect book for fans of Hidden Figures.

Tina Cassidy is the executive vice president and chief content officer at the public relations and social content firm InkHouse and also a board member at the New England Center for Investigative Reporting. She has written three nonfiction books, including Birth: The Surprising History of How We Are Born and Jackie After O: One Remarkable Year When Jacqueline Kennedy Onassis Defied Expectations and Rediscovered her Dreams. Previously, she was a journalist at the Boston Globe, where she covered politics, sports, fashion, and business.