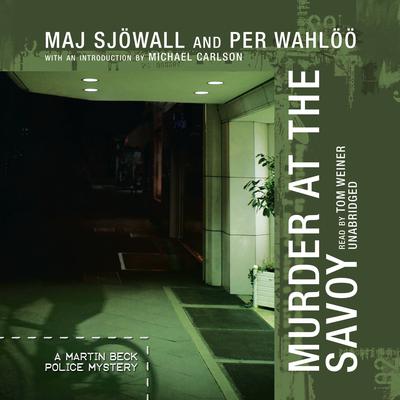 Murder at the Savoy

When Viktor Palmgren, a powerful industrialist, is shot during an after-dinner speech, the repercussions—both on the international money markets and on the residents of the small coastal town of Malmö—are widespread. Chief Inspector Martin Beck is called in to help catch a killer nobody, not even the victim, was able to identify. He begins a systemic search for the friends, enemies, business associates and call girls who may have wanted Palmgren dead. But in the process, he finds to his dismay that he has nothing but contempt for the victim and sympathy for the murderer.

This is the sixth thrilling installment in the Martin Beck detective series from the 1960s, the novels that have inspired all crime fiction written ever since.

“The large and varied cast is nicely captured by Tom Weiner’s able and often wonderfully witty performance. Especially when he creates dialogue between two characters with utterly different pitches and timbres, you’ll be tempted to laugh with pleasure. One cares less about who actually ‘dunit’ than about the characters, which makes audio the perfect way to enjoy this book.” —AudioFile
“Lean, sardonic, and insightful…Murder at the Savoy is well up to the standards of this excellent series, and praise does not come much higher than that.” —Eurocrime.co.uk

Maj Sjöwall and Per Wahlöö, wife and husband team, wrote ten Martin Beck mysteries, virtually creating the modern police procedural. In addition to the many short stories and novels he wrote, Mr. Wahlöö, who died in 1975, wrote numerous radio and television plays and was a reporter for several Swedish newspapers and magazines. Maj Sjöwall is also a journalist and poet. She lives in Sweden.

Maj Sjöwall and Per Wahlöö, wife and husband team, wrote ten Martin Beck mysteries. Maj Sjöwall, besides being a crime novelist, is also a poet. Per Wahlöö, who died in 1975, was a reporter for several Swedish newspapers and magazines and wrote numerous radio and television plays, film scripts, short stories, and novels.