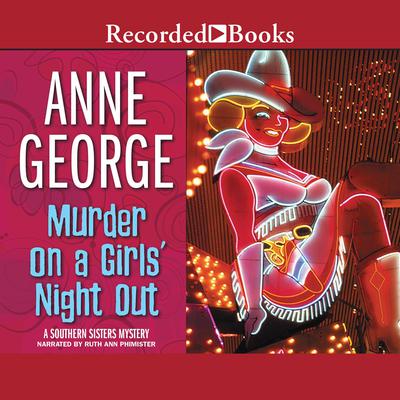 Murder on a Girls' Night Out

Novelist Anne George injects murder, mayhem, and laughs into her popular mysteries. Nominated for an Agatha Award, this hilarious tale of two "60 something" sisters reveals the deadly consequences of a hasty real estate purchase. Retired Alabama school teacher Patricia Anne thinks her older sister, flamboyant Mary Alice, has lost her cotton-pickin' mind. On a whim, Mary Alice bought the Skoot 'n' Boot, the local country western night spot where she and her boyfriend hang out. Mary Alice insists it will be easy to run the club-until the previous owner is found executed, gangland style, in the club's wishing well. Suddenly the sheriff is demanding answers, and a killer with unfinished business is sending messages even optimistic Mary Alice can't ignore. With her dramatic sense of timing, narrator Ruth Ann Phimister brings out both the wise-cracking fun and the nailbiting suspense.

“Truly delightful, laugh-out-loud fun.”  —Jill Churchill
“Anne George may be my favorite discovery of the year.”  —New Orleans Times
“Sprightly dialogue and a humorous eye for detail get this mystery off to a promising start.”  —Publishers Weekly