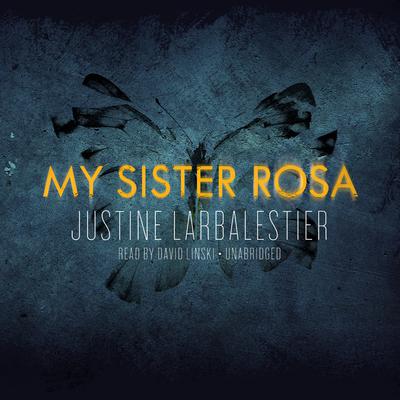 A Shelf Awareness Best Book of 2016

What if the most terrifying person you know is your ten-year-old sister?

Seventeen-year-old Aussie Che Taylor loves his younger sister Rosa. But he’s also certain that she’s a diagnosable psychopath—clinically, threateningly, dangerously. Recently Rosa has been making trouble, hurting things. Che is the only one who knows; he’s the only one his sister trusts. Rosa is smart, talented, pretty, and very good at hiding what she is and the violence she’s capable of.

Their parents, whose business takes the family from place to place, brush off the warning signs as Rosa’s “acting out.” Now that they have moved again—from Bangkok to New York City—their new hometown provides far too many opportunities for Rosa to play her increasingly complex and disturbing games. Alone, Che must balance his desire to protect Rosa from the world with the desperate need to protect the world from her.

“Quickly races into psychological thriller territory that meets and beats The Silence of the Lambs for suspense.” —Cory Doctorow, New York Times bestselling author
“An utterly compelling and wonderfully creepy exploration of the many faces of psychopathy. Rosa will stay with you long after you turn the last page.” —Jay Kristoff, New York Times bestselling author
“A toe-curling psychological thriller.” —Sydney Morning Herald
“Haunting…Che is a compelling protagonist and his love/hate relationship with his younger sister is something any sibling will find relatable.” —RT Book Reviews (4½ stars, Top Pick!)
“A chilling contemplation on human morality…incorporating sharp commentary on privilege, faith, gender identity, and race.” —Publishers Weekly (starred review)
“A tense, thrilling rumination on the psychology of evil, this work manages to keep a suspenseful tone while also showcasing a burgeoning romantic relationship. There are also a wide variety of nuanced and complex diverse characters in Che’s New York City neighborhood.” —School Library Journal (starred review)
“The 1956 film The Bad Seed meets 2016; readers will be simultaneously terrified when Rosa’s present and afraid to let her out of their sight.” —Kirkus Reviews (starred review)
“Mature teens and adult thriller fans will devour this suspenseful, chilling meditation on the roles of nature and nurture in creating dangerous criminals.” —Shelf Awareness (starred review)
“A captivating exploration of family, fate, and the fight to outrun them.” —Booklist
“A slow boil, moody and tense, with just the right amount of creep factor…The threat of violence from Rosa is suspenseful and truly terrifying.” —Horn Book

Justine Larbalestier is an Australian American writer who was born and raised in Sydney. Her solo novel Liar received starred reviews from four major review publications, was short-listed for eleven awards and won four, and was named a best book of the year by Young Adult Library Services Association (YALSA), School Library Journal, Bank Street Books, and Michigan Thumps Up, as well as winning the 2010 White Ravens Award from the International Youth Library. She also wrote How to Ditch Your Fairy and the Magic or Madness trilogy, as well as coedited the Zombies vs. Unicorns anthology with Holly Black. Justine lives in Sydney, Australia, where she gardens, boxes, and tweets far too much.