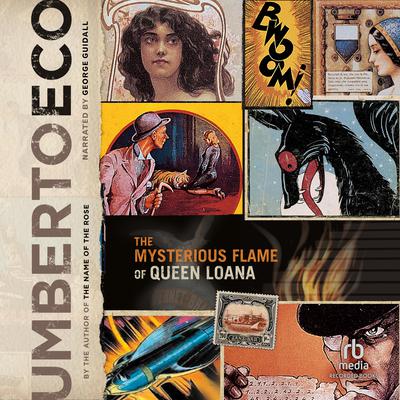 Internationally best-selling author Umberto Eco is a master stylist whose books, including Baudolino, have been savored by millions around the world. Now, with The Mysterious Flame of Queen Loana, he crafts another ambitious and breathtaking novel. When book dealer Yambo suffers amnesia, his only remaining memories are books, poems, songs, and movies. Steeped in nostalgia and filled with vivid imagery, this work is a magnificent addition to Eco's literary legacy.

“Brilliantly written and gorgeously illustrated… As we accompany Yambo on his trail of self-discovery, we see Umberto Eco, one of the great minds of our era, reveal a little of his heart.” —Chicago Sun-Times

Umberto Eco (1932–2016) was an Italian novelist, literary critic, philosopher, semiotician, and university professor. He is best known internationally for his novel The Name of the Rose, a historical mystery combining semiotics in fiction with biblical analysis, medieval studies, and literary theory. He later wrote other novels, including Foucault’s Pendulum, The Island of the Day Before, and The Prague Cemetery. He also wrote academic texts, children’s books, and essays. He was the founder of the department of media studies at the University of the Republic of San Marino, president of the graduate school for the study of the humanities at the University of Bologna, member of the Accademia dei Lincei, and an honorary fellow of Kellogg College, Oxford. He was A co-honoree of the Kenyon Review Award for Literary Achievement in 2005.