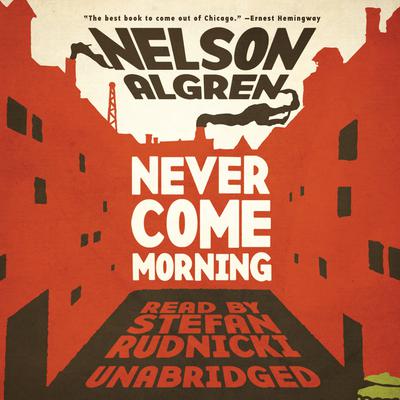 Bruno Bicek, “Lefty,” is a prizefighter and small-time hood in Chicago. Boxing is his ticket to escape hard times and gang life, but when Bruno doesn’t prevent the brutal gang rape of his girlfriend, Steffi, it tears them apart, their worlds changed forever. Bruno is sent to jail and Steffi to a brothel governed by the brutality of a local crime boss, the Barber. Sinister and dark, the Barber controls Steffi and has no intention of letting her go. Why should he, when he holds all the cards? Bruno and Steffi, who dream of breaking free, learn this in the end and find that for them there will be no bright morning.

“The best book to come out of Chicago.” —Ernest Hemingway
“An unusual book and a brilliant book.” —New York Times
“Chicago pours forth from Stefan Rudnicki—not the satirical ‘da Bears’ version but not a variety that is overly familiar, either. Algren’s masterpiece, which deserves a much higher readership, takes place in the brutal, dead-end, largely Polish enclaves of Wicker Park, Chicago, circa 1942. Bruno ‘Lefty’ Bicek is a twenty-year-old gifted boxer who foolishly believes the ring offers him passage to his American Dream. But his world is circumscribed by organized crime, Chicago-style ward politics, and violence that is as casual as it is unpredictable. Dreams do not come true in such places. Seeming to arise from these gritty streets, Rudnicki’s narration conveys a despair and a terror that do not quickly dissipate.” —AudioFile
“A dark and sordid picture of evil of the streets.” —Kirkus Reviews