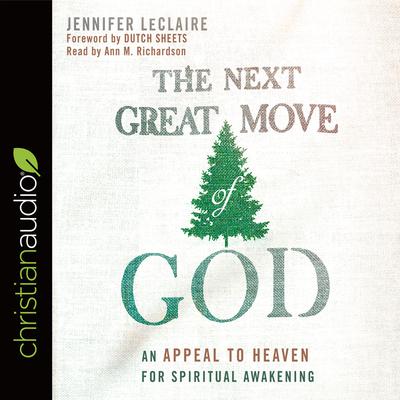 Next Great Move of God: An Appeal to Heaven for Spiritual Awakening

BE PART OF THE MOVEMENTTHAT REACHES HEAVEN Before its foundation America first flew the Appeal to Heaven flag. It was the banner George Washington used on his navy ships to signal that their only hope against British rule and religious persecution was an appeal to heaven. The crusade continues today. Sparked in part by a revelation Dutch Sheets received over the course of twelve years, the nation is being called back to prayer for a Third Great Awakening. As a result, pockets of revival are breaking out across the nation. Through in-depth interviews, eye-witness accounts, transcribed speeches, and prophetic visions from noted leaders such as Billy Graham, Reinhard Bonnke, the late Steve Hill, and others, The NextGreat Move of God serves as a means to not only fan the fires of revival unto this awakening but also equip you to sustain it.

Jennifer LeClaire is senior leader of the Awakening House of Prayer in Fort Lauderdale, Florida; founder of the Ignite prophetic network; cofounder of AwakeningTV.com; and author of many books, including Mornings With the Holy Spirit, The Next Great Move of God, Jezebel’s Puppets, Waging Prophetic Warfare, and Releasing the Angels of Abundant Harvest.