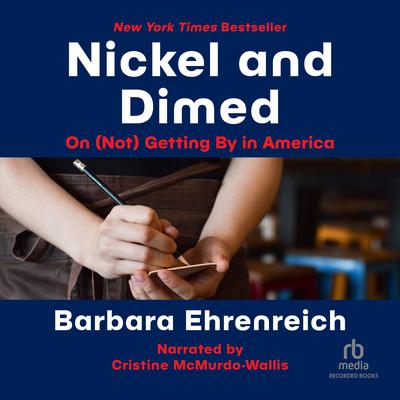 Nickel and Dimed: On (Not) Getting By in America

An Indie Next Recommendation

This engrossing piece of undercover reportage is a New York Times best-seller. With nearly a million copies in print, Nickel and Dimed is a modern classic that deftly portrays the plight of America's working-class poor. Author Barbara Ehrenreich decides to see if she can scratch out a comfortable living in blue-collar America. What she discovers is a culture of desperation, where workers often take multiple low-paying jobs just to keep a roof overhead.

“Impassioned, fascinating, profoundly significant, and wildly entertaining…Nickel and Dimed is not only important but transformative in its insistence that we take a long hard look at the society we live in.”  —O, The Oprah Magazine
“Captivating…promise that you will read this explosive little book cover to cover and pass it on to all your friends and relatives.” —New York Times
“In this modern classic of reportage, Ehrenreich chronicled her attempts to live on the minimum wage in three American states…The US economy as she experienced it is full of routine humiliation, with demands as high as the rewards are low. Two decades on, this still reads like urgent news.” —The Guardian (London)
“Valuable and illuminating…Barbara Ehrenreich is our premier reporter of the underside of capitalism.” —New York Times Book Reveiw
“Ehrenreich is passionate, public, hotly lucid, and politically engaged.” —Chicago Tribune
“Ehrenreich’s scorn withers, her humor stings, and her radical light shines on.” —Boston Globe

Barbara Ehrenreich is the author of over a dozen books, including the New York Times bestsellers Nickel and Dimed, Bait and Switch, Living with a Wild God, and The Worst Years of Our Lives.