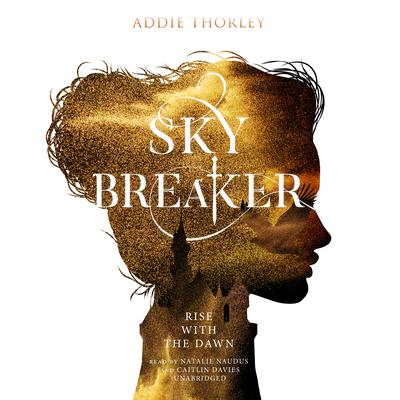 By Addie Thorley
Read by Natalie Naudus  and Caitlin Davies

Addie Thorley razes kingdoms, freezes souls, and challenges the nature of the Gods themselves in this stunning and relentless sequel to Night Spinner.

On the run from the king who banished her and the allies who betrayed her, Enebish travels with Serik and a band of rebels to find the deposed King of Verdenet, who is their only hope of uniting the Protected Territories and bringing peace to Ashkar.

Meanwhile, the Sky King’s patience with Ghoa has run its course. Enemy forces are bearing down on the Sky Palace, and when Ghoa throws all her power into a last-ditch effort to prove herself, the Sky King and her fellow warriors abandon her. Captured by enemy Zemyans, Ghoa is imprisoned and tortured by the merciless Kartok. Surprisingly, it’s not the Sky King he craves information on—but the First Gods, and the very nature of her otherworldly power.

Spirits fracture and alliances wither, as the monstrous outcast, the irreverent monk, and the disgraced warrior are drawn into a fight that will shape the course of an empire.

Addie Thorley spent her childhood in the wilds of Utah, playing soccer, riding horses, and scribbling stories. After graduating from the University of Utah with a degree in journalism, she decided “hard news” didn’t contain enough magic and kissing, so she flung herself into the land of fiction and never looked back. She now lives in Princeton, New Jersey, with her husband, daughter, and wolf dog.