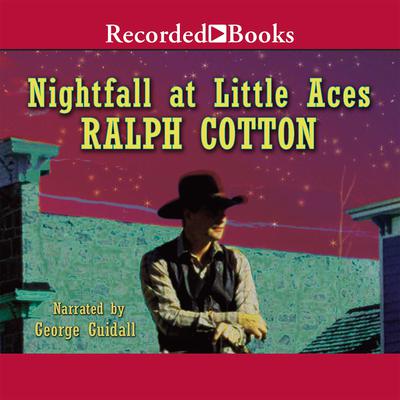 With 1.5 million copies of his books in print, Ralph Cotton has won countless fans for his authentic, actionpacked Westerns. Sheriff 's widow Emma Vertrees is far from the straight-and-narrow citizen the residents of Little Aces assume her to be. When fate reunites her with Memphis Warren Beck, a member of a despicable collection of miscreants known as the Hole-in-the-wall Gang, Arizona Ranger Sam Burrack finds himself right in the line of fire.

“Border bandits, gunslinging rangers, and unrequited lovers populate Cotton’s action-packed Western…Nightfall at Little Aces is full of gritty characters, isolated desert scenery, and lots of riveting action…Guidall reads like a relaxed storyteller, his dialogue unembellished with minimal variations between characters. He keeps the action sequences—whether a karate kick to the jaw or a trailside shout-out—packed with violent tension. Those who prefer skilled and subtle readings will delight in Guidall’s performance.” —AudioFile

Ralph Cotton is the USA Today bestselling author of the critically-acclaimed Jetson Nash series. His first novel, While Angels Dance, was nominated for a Pulitzer Prize in 1994. Since then, he has written a number of successful series, including the Ranger series, the Dead or Alive trilogy, and the Danny Duggin series, along with a number of standalone novels. Before becoming a writer, Cotton was a horse trainer, a lay minister, and the second mate on a commercial barge. He lives in Corydon, Illinois.