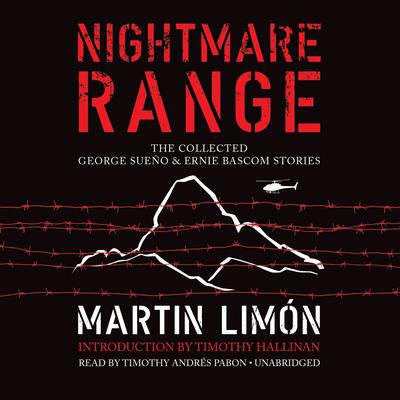 The Sergeants Sueño and Bascom Mysteries

Twenty years ago Martin Lim├│n published his first mystery featuring Sergeant George Sue├▒o, a young Mexican American army detective stationed on the US Eighth Army base in South Korea in the early 1970s, the heart of the Cold War. George and his investigating partner, the rowdy and short-fused Sergeant Ernie Bascom, are assigned cases in which the Eighth Army has come into conflict with local Korean law enforcement—often incidents in which American soldiers, who are not known for being on their best behavior in their Asian host country, have committed a crime. Sue├▒o's job is partially to solve crimes but mostly to cover top brass' backside and make sure the US Army doesn't look bad. Thoughtful, observant George, who is conversant in Korean, constantly faces difficult choices about whether to follow his orders or his conscience.

After eight critically acclaimed novels comes this collection of Lim├│n's award-winning short stories featuring sergeants Sue├▒o and Bascom. The stories have been published over the last twenty years in a variety of magazines, mostly in Alfred Hitchcock, but have never before been available in book form. This volume is sure to attract both critical attention and appeal to collectors and is a must-have for literary mystery readers.

“Limón is one of the best military writers ever. His stories are addictive entertainment today—and valuable slices of history tomorrow.” —Lee Child
“Korean-speaking Sgt. George Sueño and his mismatched partner, the fiery Sgt. Ernie Bascom, make military detecting captivating. At times dark and brusque, the tales nonetheless demonstrate an empathy with the Korean people…Snap up this volume immediately. All seventeen stories have been published over two decades (dating back to 1993), and they provide a superb introduction to Limón’s stellar series. Limón effectively stirs compassion into his military procedurals and never loses sight of his characters’ humanity. —Library Journal (starred review)
“Seventeen tough cases from the files of a pair of two-fisted military detectives, circa 1971…Limón’s strengths are the muscular immediacy of his prose, the gritty righteousness of his heroes, and the vivid depiction of the complex subculture that they troll. The more streamlined plots of his short stories make these elements more prominent. This is the rare collection whose whole is greater than the sum of its parts.” —Kirkus Reviews (starred review)
“In the seventeen stories in this strong collection from Limón Eighth Army Criminal Investigation Division detectives George Sueño and Ernie Bascom often deal with prostitutes, swindlers, and black marketers who pop up wherever naïve soldiers and American relative wealth intersect with Korean poverty and political desperation…An underlying theme of justice for the innocent…keeps the tales from becoming mired in gloom.” —Publishers Weekly
“Each story offers some striking insight about Korea, the decades-long hangover of war and tense cease-fire, or the US Army and its culture.” —Booklist

Martin Limón retired from military service after twenty years in the US Army, including ten years in Korea. He is the author of the Sergeants Sueño and Bascom series, which includes Jade Lady Burning, Slicky Boys, Buddha’s Money, The Door to Bitterness, The Wandering Ghost, GI Bones, Mr. Kill, and The Joy Brigade. He lives near Seattle.