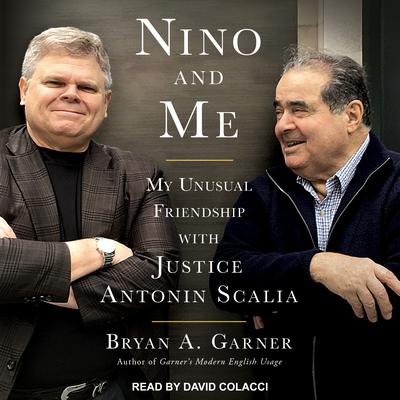 Nino and Me: My Unusual Friendship with Justice Antonin Scalia

By Bryan A. Garner
Read by David Colacci

From legal expert and veteran author Bryan Garner comes a unique, intimate, and compelling memoir of his friendship with the late Supreme Court Justice Antonin Scalia.

For almost thirty years, Antonin Scalia was arguably the most influential and controversial Justice on the United States Supreme Court. His dynamic and witty writing devoted to the Constitution has influenced an entire generation of judges.

Based on his reputation for using scathing language to criticize liberal court decisions, many people presumed Scalia to be gruff and irascible. But to those who knew him as "Nino," he was characterized by his warmth, charm, devotion, fierce intelligence, and loyalty.

Bryan Garner's friendship with Justice Scalia was instigated by celebrated writer David Foster Wallace and strengthened over their shared love of language. Despite their differing viewpoints on everything from gun control to the use of contractions, their literary and personal relationship flourished. Justice Scalia even officiated at Garner's wedding.

In this humorous, touching, and surprisingly action-packed memoir, Garner gives a firsthand insight into the mind, habits, and faith of one of the most famous and misunderstood judges in the world.