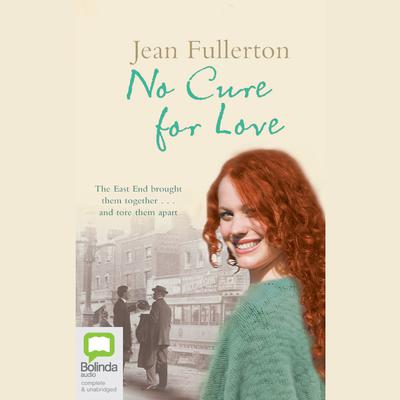 No Cure for Love

The 1st novel in the East End Nolan Family series.

The most talented voice since Dilly Court - an absorbing, thrilling and romantic historical saga with characters you'll fall in love with.

Ellen O'Casey, an Irish Catholic immigrant, is struggling to support her ailing mother, her teenage daughter and herself. Washing other people's laundry in the day, and singing in bawdy pubs at night, Ellen is determined to make a better life for her family by saving enough for the passage to New York where the rest of her extended family have already emigrated. But Danny Donovan, a local gangster and the landlord of the pubs where Ellen sings, intends to make her his mistress. A widow in her late 20s, Ellen has refused to let another man in her life, least of all the brutish Danny, whose advances she doggedly resists.

But when Ellen catches the eye of the new doctor in town, Robert Munroe, an intense rivalry is formed between the doctor and Danny. For not only are Robert's feelings for Ellen reciprocated, but the ambitious doctor also intends to investigate the appalling living conditions of the local community and Danny's own hand in it. But as Ellen and Robert become closer and aim to bring an end to Danny's reign of terror, their own chance at happiness seems suddenly to be at stake...

Jean Fullerton is a native Londoner and was born in the East End within the sound of Bow Bells. Until she was five her family lived in Wapping, alongside the Thames, and then moved to Stepney. She is a trained nurse and teaches healthcare and nursing. No Cure for Love won the 2006 bi-annual Harry Bowling Prize for a novel set in London and written by an unpublished author. Jean’s husband is a Church of England vicar, and his parish includes the site of the 2012 Olympic Games. She has three daughters.