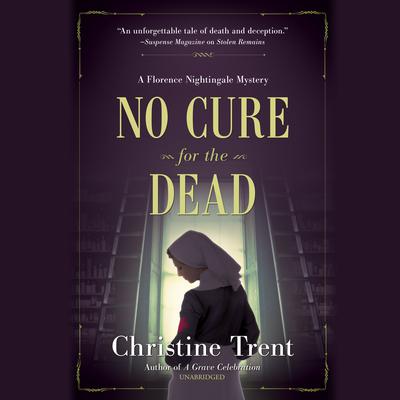 No Cure for the Dead: A Florence Nightingale Mystery

When a young nurse dies on her watch, Florence Nightingale must uncover the deep-hidden secrets someone will kill to keep buried.

It is 1853. Lady of the Lamp Florence Nightingale has just accepted the position of superintendent of the Establishment for Gentlewomen during Temporary Illness in London. She has hardly had time to learn the names of the nurses in her charge when she suddenly finds one of them hanging in the establishment’s library. Her name was Nurse Bellamy.

Florence’s mettle is tested by the dual goals of preserving what little reputation her hospital has and bringing Nurse Bellamy’s killer to justice. Her efforts are met with upturned noses and wayward glances, except for her close friend and advocate inside the House of Commons, Sidney Herbert. As Florence digs deeper, however, her attention turns to one of the hospital investors and suddenly, Sidney becomes reluctant to help.

With no one but herself to count on, Florence must now puzzle out what the death of an unknown, nondescript young nurse has to do with conspiracies lurking about at the highest levels of government—before she is silenced too.

“Clever and complex, with many hanging threads that are ably clipped by Florence during the denouement. Trent is doing double duty here: telling a great story and educating the reader.” — Mystery Scene Magazine
“Skillfully blending the stories of actual people with fictional characters, including several from her ‘Lady of Ashes’ series, Trent weaves a serious tale with a sobering tone that will appeal to fans of Nancy Herriman’s British-born nurse.” —Library Journal
“A natural fit for fans of Ann Perry’s William Monk mysteries.” —Booklist
“Trent transforms the Lady of the Lamp, Florence Nightingale, into a natural and formidable sleuth…A riveting start to this new series.” —Anna Lee Huber, nationally bestselling author of the Lady Darby Mysteries

Christine Trent is the author of the Lady of Ashes mysteries, the Florence Nightingale mysteries, and several other historical novels. She writes from her two-story home library, where she lives with her husband, precocious cats, a large doll collection, too many fountain pens, and over four thousand catalogued books.