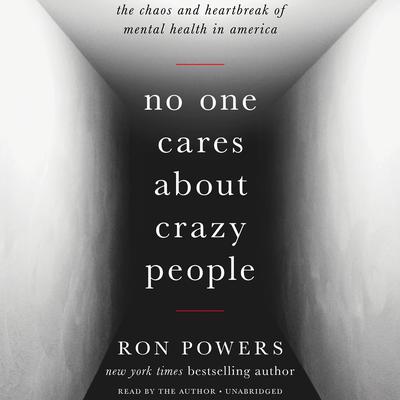 No One Cares about Crazy People: The Chaos and Heartbreak of Mental Health in America

A People Magazine Best Book of 2017

Longlisted for the Stephan Russo Book Prize for Social Justice

One of Kirkus Reviews’ Best Books of 2017

A Shelf Awareness Best Book of 2017

From the centuries of torture of “lunatiks” at Bedlam Asylum to the infamous eugenics era to the follies of the anti-psychiatry movement to the current landscape in which too many families struggle alone to manage afflicted love ones, Powers limns our fears and myths about mental illness and the fractured public policies that have resulted.

Braided with that history is the moving story of Powers’ beloved son Kevin—spirited, endearing, and gifted—who triumphed even while suffering from schizophrenia, until finally he did not, and the story of his courageous surviving son Dean, who is also schizophrenic.

A blend of history, biography, memoir, and current affairs ending with a consideration of where we might go from here, this is a thought-provoking look at a dreaded illness that has long been misunderstood.

“Powers’ voice is resonant and strong with an undercurrent of melancholy and an overlay of fury, making it a raw and searing experience for the listener, too….Both sons are accomplished guitarists, and multiple snippets of their magical musical performances enhance the narrative.” —AudioFile
"[A] heartbreaking tribute to [Powers’] sons…and an urgent plea for reform.” —People
“One of the most engrossing accounts of raising a family I’ve ever read, one in which Mr. Powers makes universal his themes of parental love, bewilderment, and rage at the vagaries of biological fate.” —Wall Street Journal
“Extraordinary and courageous…No doubt if everyone were to read this book, the world would change.” —New York Times Book Review
“Powers gives us powerful stories of real suffering and societal apathy toward the plight of our fellow citizens. Their struggles must not be forgotten as we continue to debate reforming our health-care system.” —Washington Post
'‘Very emotional…[Powers] reminds us how apathetic and cruel society can be when it comes to mental illness.” —Booklist (starred review)
Presents two searing sagas: an indictment of mental health care in the United States and the story of his two schizophrenic sons…. This hybrid narrative, enhanced by the author’s considerable skills as a literary stylist, succeeds on every level. —Kirkus Reviews (starred review)
“[A] searingly personal, heart-wrenching account of the schizophrenia that overtook his two talented, promising sons.” —Library Journal
No One Cares About Crazy People is a woefully necessary kick in the teeth to society's understanding and treatment of mental illness. Reading Ron Powers is always an event--you can expect expert research and rich reporting in an engrossing style--but what makes this book soar is the passion of Powers' conviction based off his own intimate experiences with schizophrenia. I put this book down days ago and I'm still reeling. It's the rare book that breaks your life into a before and an after. —Susannah Cahalan, New York Times bestselling author of Brain on Fire
Ron Powers writes eloquently, passionately, and persuasively about the failure to properly treat mental illness in America. What makes this book really powerful is Powers's personal story-the harrowing, wrenching tale of his two sons wrestling with the unholy demon of schizophrenia. —Evan Thomas, author of Being Nixon
Whether Ron Powers is writing about Mark Twain, small-town life in the Midwest, the state of television, or crime, his books resonate. Now he has written the book he never wanted to tackle-about the schizophrenia of his sons and the cruel failures of the American mental health establishment. —Steve Weinberg, author of Taking on the Trust
In telling this gripping and deeply personal story, Ron Powers puts chronic mental illness in the broad context of history, society, and public policy. His compelling account helps shake us out of the embarrassment and apathy that have tethered public discourse and lasting action to treat mental illness. Despite fitful progress, real and lasting progress and empathy are still so easily tripped up by ignorance, fear, and unease. Ron Powers explains why we need to move beyond the stigma that still makes progress difficult, and sometimes impossible. The story he tells is not a comfortable one, but it's an important one. —U.S. Senator Patrick Leahy (D-Vt.)
Ron Powers and his wife never expected to visit the exotic lands of schizophrenia until their two sons became affected. A gifted professional writer, Powers takes the reader along on his explorations as he tries to understand why it happened and what to do. What he finds is "the most dreaded of all human mental disorders." Very readable and highly recommended. —E. Fuller Torrey, MD, author of Surviving Schizophrenia
This is the book that Ron Powers, one of America's most elegant chroniclers, vowed he would never write. Too disturbing, too painful, too intimate. We are fortunate that he changed his mind. Powers has tackled his most challenging subject yet with erudition, humanity, and courage. By allowing readers into the sanctity of his home, he makes real the toll of mental illness on those who suffer, their families, and the community. No One Cares About Crazy People is an unforgettable, insistent call for a nationwide conversation and action, for embracing our most vulnerable benefits us all. —Pamela Rotner Sakamoto, author of Midnight in Broad Daylight

Ron Powers is the author of numerous books, including Dangerous Water: A Biography of the Boy Who Became Mark Twain, and coauthor of the #1 New York Times bestseller Flags of Our Fathers. He is an Emmy Award winner and the first television critic to win a Pulitzer Prize.