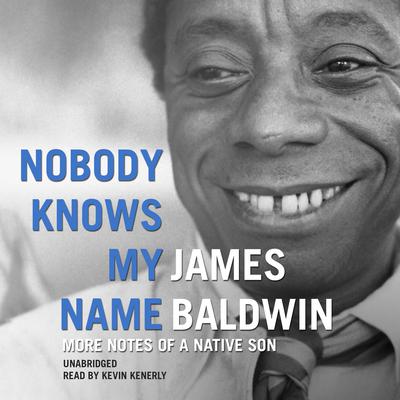 Nobody Knows My Name: More Notes of a Native Son

James Baldwin’s Nobody Knows My Name records the last months of this famed American writer’s ten-year self-exile in Europe, his return to America and to Harlem, and his first trip south at the time of the school integration battles. It contains Baldwin’s controversial and intimate profiles of Norman Mailer, Richard Wright, and Ingmar Bergman. And it explores such varied themes as the relations between blacks and whites, the role of blacks in America and in Europe, and the question of sexual identity.

“Brilliant…accomplished…masterly…A splendid book. James Baldwin is a skillful writer, a man of fine intelligence, and a true companion in the desire to make life human.” —New York Times
“A bright and alive book, full of grief, love, and anger.” —Chicago Tribune
“A major literary talent…Passionate, probing, controversial…A searing commentary.” —Atlantic
“Narrator Kevin Kenerly does an outstanding job bringing just the right tone to a book that could have, in lesser hands (or voice, as the case may be), come across as strident or lecturing. Instead, Kenerly expertly conveys Baldwin’s struggle to understand the times in which he was living, his self-imposed exile abroad, subsequent decision to return home—and then venture into the South. The series of essays in this audiobook sheds light on the thinking of one of this country’s preeminent intellects. Baldwin could not have asked for his words to be delivered by someone better than Kevin Kenerly.” —AudioFile

James Baldwin (1924–1987), acclaimed New York Times bestselling author, was educated in New York. His first novel, Go Tell It on the Mountain, received excellent reviews and was immediately recognized as establishing a profound and permanent new voice in American letters. The appearance of The Fire Next Time in 1963, just as the civil rights movement was exploding across the American South, galvanized the nation and continues to reverberate as perhaps the most prophetic and defining statement ever written of the continuing costs of Americans’ refusal to face their own history. It became a national bestseller, and Baldwin was featured on the cover of Time. The next year, he was made a member of the National Institute of Arts and Letters and collaborated with the photographer Richard Avedon on Nothing Personal, a series of portraits of America intended as a eulogy for the slain Medger Evers. His other collaborations include A Rap on Race with Margaret Mead and A Dialogue with the poet–activist Nikki Giovanni. He also adapted Alex Haley’s The Autobiography of Malcolm X into One Day When I Was Lost. He was made a commander of the French Legion of Honor a year before his death, one honor among many he achieved in his life.