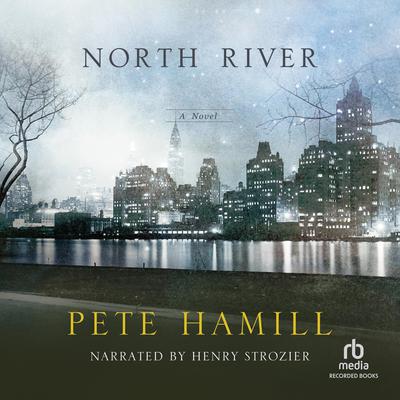 In North River, critically acclaimed, best-selling author Pete Hamill whisks listeners back to 1934-when the Great Depression held New York City in its relentless grip-for a story of one remarkable man's perseverance. Haunted by the horrors ofWorldWar I, Dr. James Delaney's personal life is a nightmare. But everything changes when he returns home one day to find his three-year-old grandson on his doorstep.

“Once again, Pete Hamill is in a New York state of mind…The city is the beloved muse of this former newspaperman who has made a deft transition to novelist…North River courses along with an undercurrent of gentle melancholy that makes you root for its characters, especially the appealingly tough-but-tender Delaney…One of the real pleasures of a Hamill novel is taking a guided tour of bygone New York. Like Carlito, you’ll marvel as you ride the Third Avenue El and gaze up with wonder at an astonishing new skyscraper: the Chrysler Building.” —USA Today
“Hamill’s quietly engrossing novel skillfully conjures the gritty world of lower Manhattan during the Depression, weaving elements of suspense, comedy and romance as Jim Delaney navigates the melting pot city…Listening to Strozier read Hamill’s evocative descriptions of Delaney walking through Union Square, Greenwich Village and Chinatown and his encounters with a wide variety of New York denizens, one can almost feel that former Manhattan resurrected.” —Publishers Weekly
“Pete Hamill’s story of a disillusioned Depression-era doctor is notably enhanced by Henry Strozier’s magnificent narration…His portrayal of Delaney is honest and mature, and you never doubt that Rose is a warm Sicilian woman. Strozier’s Carlito is a sweet little boy, not an adult trying to sound like a little boy. This is an audiobook that shines as a masterful marriage of the written and spoken word.” —AudioFile
“Hamill is as closely identified with his native city as the Empire State Building or the Bowery. As usual, his new novel draws closely and intensely from the streets of New York, but also usual for him, the book’s appeal extends far beyond the five boroughs…Hamill is not ordinarily thought of as a historical novelist, but if, as the saying goes, the shoe fits, wear it. It is an extremely good fit here.” —Booklist (Starred Review)

Pete Hamill is a novelist, journalist, editor, and screenwriter. He is the author of more than twenty books, including the bestselling novels Forever and Snow in August and the bestselling memoir A Drinking Life. He writes a column for the New York Daily News and lives in New York City.