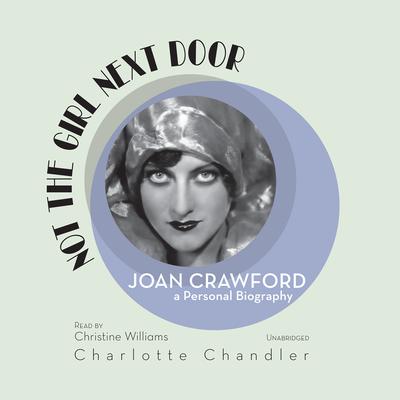 Not the Girl Next Door: Joan Crawford, a Personal Biography

She was beautiful, talented, irascible, ruthless, vulnerable, and a true Hollywood legend. From abused child to dance-hall entertainer to silent-film actress, she went on to become one of Hollywood’s screen goddesses with films such as Possessed opposite Clark Gable, with whom she began a torrid off-screen affair, Grand Hotel, and Mildred Pierce, her Academy Award–winning film. Joan Crawford succeeded and survived through sheer determination, talent, invention, and re-invention.

Now, Charlotte Chandler, the acclaimed biographer of Ingrid Bergman (Ingrid), Bette Davis (The Girl Who Walked Home Alone), and Groucho Marx (Hello, I Must Be Going), gives us a revealing and often surprising portrait of Joan Crawford, much of it in Joan Crawford’s own words.

“Indispensable for future considerations of Crawford.”  —Los Angeles Times
“This is the definitive book on Crawford’s life and her career. It’s entertaining while offering convincing authenticity.”  —Rocky Mountain News
“Reveal[s] a hardworking, disciplined and generous woman who lived for work…Chandler’s bio is a breezy, laudatory read that would have pleased Crawford.” —Publishers Weekly
“The former Lucille LaSueur’s story may never have been better told.” —Booklist

Charlotte Chandler's first book, Hello, I Must Be Going, was a bestseller about Groucho Marx. Her second book, The Ultimate Seduction, included conversations with Mae West, Tennessee Williams, Henry Moore, and others. Her next book, I, Fellini, was a New York Times Notable Book and has been published in twenty-five foreign editions. Her book about Billy Wilder, Nobody's Perfect, is being produced as a stage play by David Brown. She lives in New York City.