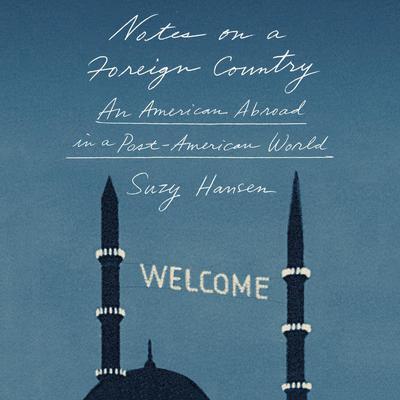 Notes on a Foreign Country: An American Abroad in a Post-American World

Finalist for the 2018 Pulitzer Prize in Nonfiction

A New York Magazine Best Books of the Year selection

In the wake of the September 11 attacks and the U.S.-led invasion of Iraq, Suzy Hansen, who grew up in an insular conservative town in New Jersey, was enjoying early success as a journalist for a high-profile New York newspaper. Increasingly, though, the disconnect between the chaos of world events and the response at home took on pressing urgency for her. Seeking to understand the Muslim world that had been reduced to scaremongering headlines, she moved to Istanbul.

Hansen arrived in Istanbul with romantic ideas about a mythical city perched between East and West, and with a naïve sense of the Islamic world beyond. Over the course of her many years of living in Turkey and traveling in Greece, Egypt, Afghanistan, and Iran, she learned a great deal about these countries and their cultures and histories and politics. But the greatest, most unsettling surprise would be what she learned about her own country—and herself, an American abroad in the era of American decline. It would take leaving her home to discover what she came to think of as the two Americas: the country and its people, and the experience of American power around the world.

“A piercingly honest critique of the unexamined white American life.” — New Yorker
“A deeply honest and brave portrait of of an individual sensibility reckoning with her country’s violent role in the world.” — New York Times Book Review
“A beautiful, angry, sad piece of writing that every American should read as we try to live in a world that has long known things about us that we are only now coming to understand.” — Progressive
“A very readable challenge to American exceptionalism.” — Financial Times (London)
“Hansen leaves us with the fervent hope that Americans can reconnect us to the rest of humanity.” —Minneapolis Star-Tribune
“When our wrenching politics have turned our gaze on ourselves, [Hansen’s] book is a necessary tonic.” —New York Magazine

Suzy Hansen is the author of Notes on a Foreign country, a finalist for the 2018 Pulitzer Prize for Nonfiction. She is a contributing writer to the New York Times Magazine and has written for many other publications. In 2007, she was awarded a fellowship from the Institute of Current World Affairs to do research in Turkey.