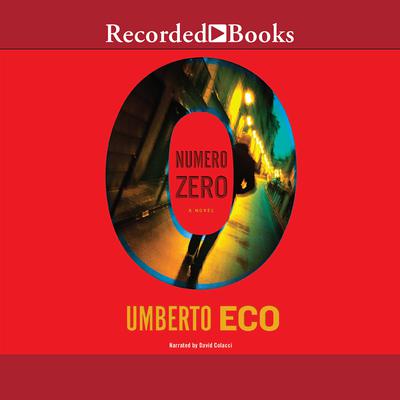 Numero Zero is the feverish and delightfully readable tale of a ghostwriter in Milan whose work pulls him into an underworld of media politics and murderous conspiracies (involving the cadaver of Mussolini's double, naturally.) This novel is vintage Eco-corrupt newspapers, clandestine plots, imaginary histories-and will appeal to his many readers and earn him legions of new ones. Umberto Eco is the 83-year-old Italian novelist best known for the international bestseller The Name of the Rose, published in 1980. The murder mystery set in a 14th-century monastery was made into a film starring Sean Connery and Christian Slater. His other books include several works of literary criticism and the bestselling novels Foucault's Pendulum, Baudolino, and his most recent, The Prague Cemetery.

Umberto Eco (1932–2016) was an Italian novelist, literary critic, philosopher, semiotician, and university professor. He is best known internationally for his novel The Name of the Rose, a historical mystery combining semiotics in fiction with biblical analysis, medieval studies, and literary theory. He later wrote other novels, including Foucault’s Pendulum, The Island of the Day Before, and The Prague Cemetery. He also wrote academic texts, children’s books, and essays. He was the founder of the department of media studies at the University of the Republic of San Marino, president of the graduate school for the study of the humanities at the University of Bologna, member of the Accademia dei Lincei, and an honorary fellow of Kellogg College, Oxford. He was A co-honoree of the Kenyon Review Award for Literary Achievement in 2005.