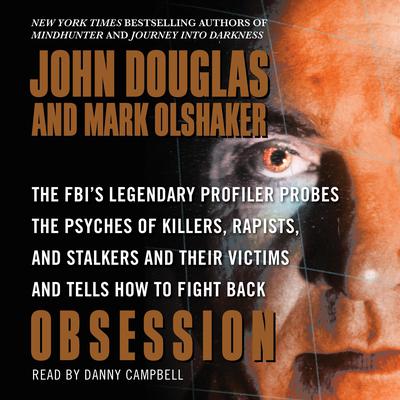 Obsession: The FBI's Legendary Profiler Probes the Psyches of Killers, Rapists, and Stalkers

In Obsession, John Douglas once again takes us fascinatingly behind the scenes, focusing his expertise on predatory crimes, primarily against women. With a deep sense of compassion for the victims and an uncanny understanding of the perpetrators, Douglas looks at the obsessions that lead to rape, stalking, and sexual murder through such cases as Ronnie Shelton, the serial rapist who terrorized Cleveland; and New York's notorious "Preppie Murder."

But Douglas also looks at obsession on the other side of the moral spectrum: his own career-long obsession with hunting these predators. Douglas shows us how we can all fight back and protect ourselves, our families, and loved ones against the scourge of the violent predators in our midst.

The first step is insight and understanding, and no one is better qualified to penetrate Obsession than John Douglas.

“Obsessionis a treat for those who enjoy trying to make sense of the world of senseless violence.” —Booklist

John Douglas, the legendary FBI criminal profiler and author of true crime books that are New York Times bestsellers, is one of the foremost experts and investigators of criminal minds and motivations. He has spent over twenty-five years researching and culling the stories of America’s most disturbing criminals. A veteran of the United States Air Force, he has directly worked on or had overall supervision in over 5,000 violent crime cases over the past forty-eight years. He is currently chairman of the board of the Cold Case Foundation.