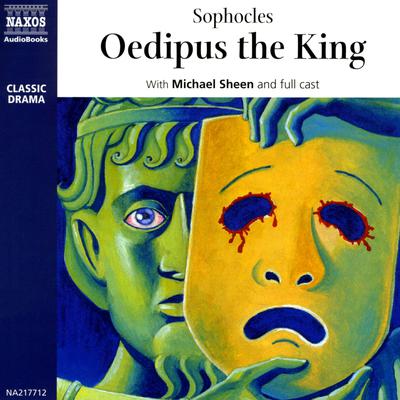 By Sophocles
Performed by  a full cast

This new translation of the great classic of ancient Greece is one of many drama recordings by Naxos AudioBooks. Oedipus tells the the anguished tale of the mythical King Oedipus, who solves the riddle of the Sphinx but, by becoming king of Thebes, accidentally fulfills the prophecy he had worked to avoid his entire life. The story of Oedipus remains a drama of unremitting power 2,500 years after it was written.

Sophocles (496 BC–406 BC), one of the great Greek dramatists of the ancient world, was born to a wealthy family at Colonus, near Athens. He had a charmed childhood, was highly educated and a personal friend of prominent statesmen, and, as a good Athenian, served faithfully as a treasurer and general for Athens when it was expanding its empire and influence. Though he wrote approximately 123 plays, only seven tragedies survive in their entirety: Ajax, Antigone, Trachinian Women, Oedipus the King, Electra, Philoctetes, and Oedipus at Colonus. With Sophocles, Greek tragedy reached its most characteristic form; he frequently beat out rivals Aeschylus and Euripides in annual drama competitions.