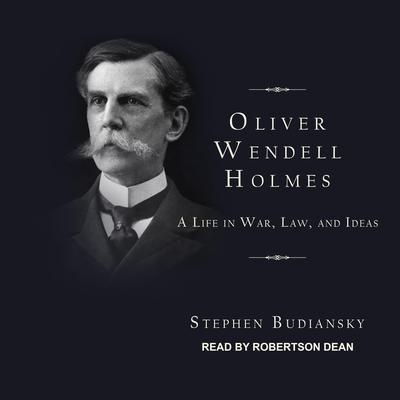 Oliver Wendell Holmes: A Life in War, Law, and Ideas

An Amazon.com Best Books of the Year So Far Pick: History

Oliver Wendell Holmes twice escaped death as a young Union officer in the Civil War when musket balls missed his heart and spinal cord by a fraction of an inch. He lived ever after with unwavering moral courage, unremitting scorn for dogma, and an insatiable intellectual curiosity.

Named to the Supreme Court by Theodore Roosevelt at age sixty-one, he served for nearly three decades, writing a series of famous, eloquent, and often dissenting opinions that would prove prophetic in securing freedom of speech, protecting the rights of criminal defendants, and ending the Court’s reactionary resistance to social and economic reforms. As a pioneering legal scholar, Holmes revolutionized the understanding of common law by showing how the law always evolved to meet the changing needs of society.

Drawing on many previously unpublished letters and records, Stephen Budiansky's definitive biography offers the fullest portrait yet of this pivotal American figure, whose zest for life, wit, and intellect left a profound legacy in law and Constitutional rights, and who was an inspiring example of how to lead a meaningful life in a world of uncertainty and upheaval.

“In this stunningly researched and compellingly written biography, Budiansky brings Holmes back to life.” —Douglas Brinkley, New York Times bestselling author
“This book also shows how Holmes’s experience as a thrice-wounded Civil War officer subtly shaped his social and juridical ideas during the next seventy years.” — James M. McPherson, New York Times bestselling author
“A lively, accessible book…This biography of the second most important Supreme Court justice, after Chief Justice John Marshall, is a lively, accessible account of a contradictory figure whose influence on the nation and the law has extended well beyond his death in 1935.” —New York Times Book Review
“Especially consequential…Budiansky’s is now the most engrossing of the major Holmes biographies.” —Harvard Magazine

Stephen Budiansky is a military historian and the author of several books about military history, intelligence and espionage, science, and the natural world, including Battle of Wits, The Bloody Shirt, and Her Majesty's Spymaster. He received a master's degree in applied mathematics from Harvard University and worked on classified military studies as a Congressional Fellow. He is a former editor and writer at U.S. News & World Report and the Atlantic as well as the former Washington editor of the scientific journal Nature. His articles have appeared in the Economist, the New York Times, and U.S. News & World ReporT. He lives in Virginia.