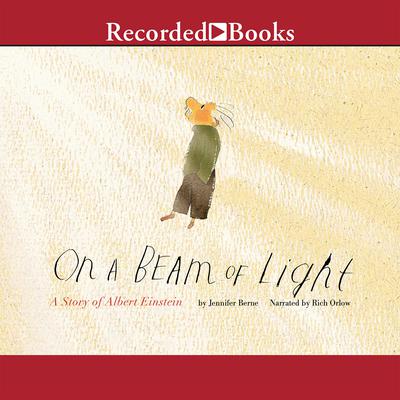 On a Beam of Light: A Story of Albert Einstein

A boy rides a bicycle down a dusty road. But in his mind, he envisions himself traveling at a speed beyond imagining, on a beam of light. This brilliant mind will one day offer up some of the most revolutionary ideas ever conceived. From a boy endlessly fascinated by the wonders around him, Albert Einstein ultimately grows into a man of genius recognized the world over for profoundly illuminating our understanding of the universe. Jennifer Berne and Vladimir Radunsky invite the reader to travel along with Einstein on a journey full of curiosity, laughter, and scientific discovery. Parents and children alike will appreciate this moving story of the powerful difference imagination can make in any life.

“By celebrating Einstein’s wonderful curiosity, this book will inspire young kids to find science fascinating.” —Walter Isaacson, New York Times bestselling author
“Something of an ‘It Gets Better Project’ for mathematically precocious children.” —New York Times
“Einstein positively glows, radiating love and intelligence.” —Washington Post
“An ingenious portrait of genius.” —San Francisco Chronicle
“Einstein’s lifelong curiosity sings through every page.” —Publishers Weekly (starred review)
“It’s not easy to explain the work of Albert Einstein to a young audience, but this marvelous book pulls it off. It does so by providing an overview of Einstein’s life: the way he thought and how his remarkable ideas changed the way scientists think…The book reroutes the text around events in Einstein’s life, such as his escape from Nazi Germany and his move to the US, and it only touches upon his work on the nuclear bomb. This is a more personal look, but still, it explains how he came to the discovery of atoms and his theories about the speed of light…The book stresses that readers may someday answer the questions that Einstein didn’t get to, and an author’s note extends the text with paragraphs about Einstein’s pacifism, personality, and thought experiments. A book as special as its subject.” —Booklist (starred review)
“Truly amazing.” —Horn Book (starred review)
“Utterly charming.” —Bulletin of the Center for Children’s Books
“It’s impossible not to be inspired, not only by Einstein himself but also by this dazzling account of his life and imagination.” —BookPage
“Rich Orlow narrates steadily and distinctly, letting the world of Albert Einstein reveal itself to young listeners. Albert was described by his parents as ‘so different, but dear.’ A gift of a compass opened up the world; a childhood experience of watching sunlight and imagining a ride on a light beam spurred him on to a life of questioning. Listeners will find Albert ‘imagining, wondering, figuring, and thinking’ while on his sailboat, playing his violin, or walking around town in his signature sweaters and baggy pants. The science of time and space had a genius on its hands, and Orlow also voices the enthusiasm of several scientists who are excited by Einstein’s teachings. The production concludes with an author’s note in which Orlow’s own passion for Einstein is evident.” —AudioFile